Well, I'm back from Salvador Waters in the North East corner of the Falkland Islands. The trip was all in aid of visiting the little islands to look for Cobb's Wren and also Rats, and to record any other birds and plants found too. It was a brilliant trip and we found lots of interesting wildlife, but unfortunately lots of rats too. In the end only one island was rat free, and it was incredible. The Tussacbirds and Cobb's Wrens were spectacular and in abundance where on the rat infested islands there were none at all. 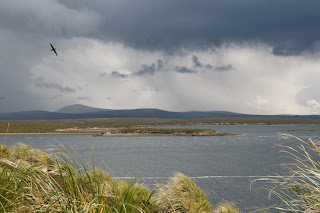 Last monday we set off to Salvador settlement, and made ourselves at home in the comfortable accomodation. There was a peat stove/boiler in the kitchen and comfortable bedrooms and a living room too. Electricity came on in the evenings around 6pm, and went off at 11:30pm, no TV, no phone, no internet :-) Wandering around the settlement we came across a boat shed, in which there was a Barn Swallow nest! Apparently it was built a a few years ago by two adult Swallows, maybe it was practice? Certainly surprising though! 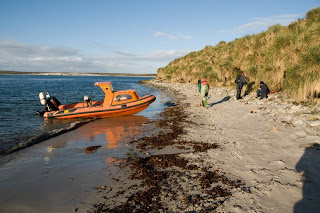 Landing with the RIB

On the Tuesday the weather forecast was excellent so we headed out at 6am and surveyed Big Shag, Little Shag, Centre, Rat, Rabbit and Ear Islands. Big Shag held my first encounter of a Sea Lion, it's quite unnerving to walk casually around a tussac to be confronted with a belching beast who then flee towards the sea, and that better not be through you as they will flatten you and have a bite if needs be! I was pretty quick to move away I can tell you!

The last Island we visited Ear Island, and it was certainly the best too, having no rats. As we were approaching in the RIB Tuccacbirds came out to see what we were up to and then went back to foraging on the shore, there were also Dark-faced Ground-tyrants, a petrel burrow, Grass Wrens and Cobb's Wren adults and juveniles too, which was the main target of the expedition. We got back at about 6pm and were worn out! 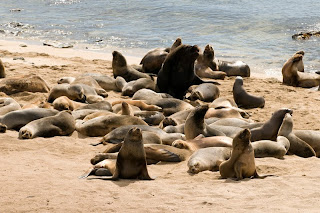 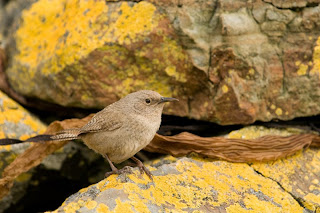 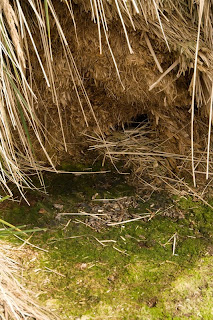 There was lots to investigate on the islands over the next few days, but all the others had rats, so birds were limited to larger species, and also interestingly Grass Wrens. We managed to find several endemic plant species including Smooth Ragwort, Wooly Ragwort, Vanilla Daisy, Coastal Nassaurvia. 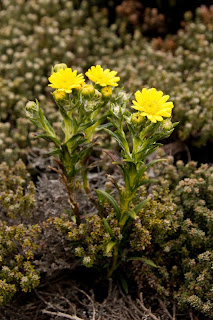 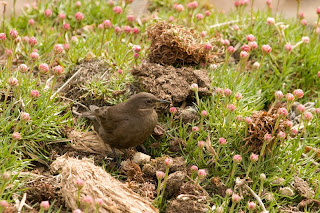 On a few days the ride in the RIB was shall we say bouncy, but it wasn't too bad and it was good fun getting to drive it around. The cabin was handy for keeping the driver dry, but without windscreen wipers was a bit tricky to see through in the spray! 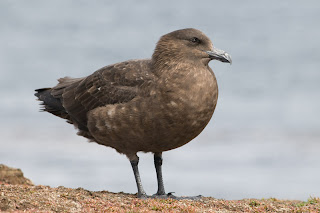 One interesting bird to see was the Falkland Skua. Having worked on Hermaness with all the Great Skuas (bonxies) it was interesting to see how little difference there is between them. This one looked rather less flecked than a bonxie, but they are so variable this is hardly a good feature to compare. 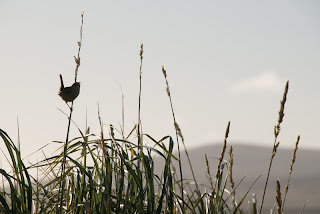 Grass Wren singing from a Tussac 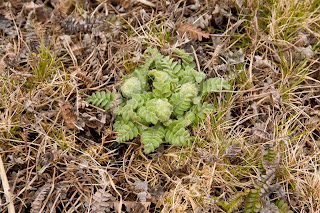 After finishing surveying the islands we took a trip out to Ronda Pond where there were about 19 Silvery Grebes, Chiloe Wigeon, Flying Steamer Duck, Yellow-billed Pintail, Speckled Teal and Magellanic Snipe, and the beach beyond where there were hundreds of White-rumped Sandpipers feeding and 3 Peale's Dolphins just off-shore.

Birds on the trip: