Cape Pembroke and the radio

Popped into the office this morning, discovered what my next job is going to be. 9 days walking around Adventure Sound and Bleaker Island doing coastal bird surveying while the Shallow Marine Survey Group do diving and bathymetric stuff in the Sound. Also discovered I'm going to be camping, well, that would be lovely but it's still rather chilly, no, freezing, and there are a lot of hail and snow showers around! At least I'll get to go onto the research vessel for dinner etc.

Had an interview with Falklands Radio for their Conservation Conversation slot, which will go out on Thursday evening. Annoyingly this was arranged at just the time the Animal health/vets decided to release the two Gentoo Penguins that were now fit and healthy after their oiling about 6 weeks ago!

This afternoon Mike Morisson and Robin Woods came round on their way to see what was on the pools down at the airport and Cape Pembroke. There were a few birds around, the Lesser Yellowlegs was still present, the second individual to be there recently. 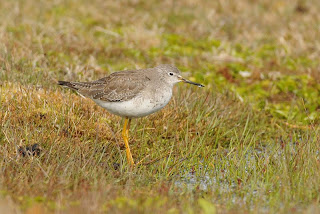 There was also a nice White-tufted Grebe on the same pool. Currently this species is listed as the same species as found in South America, but, apparently it's much bigger and there isn't even any size overlap. There is some genetic analysis going on at the moment, it'll be interesting to see the outcome. 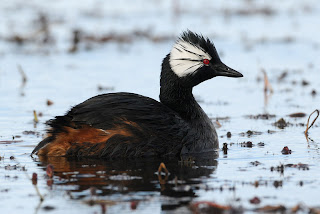 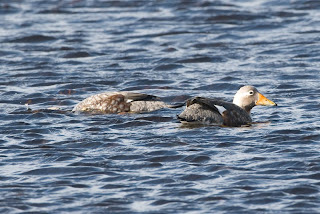 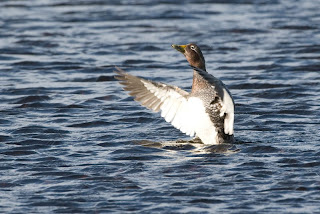 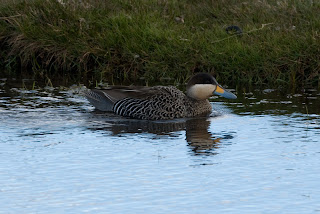 There was a Variable Hawk sitting on top of a dune, presumably waiting for a suitable dinner to come along!