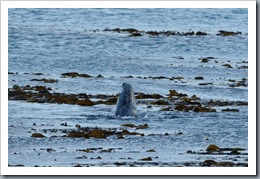 The other evening there was some excitement as a Leopard seal was spotted out in the kelp. It could be seen thrashing something around, but we couldn’t quite see what it was until I zoomed in on the photos. It did in fact turn out to be a Fur Seal pup. In some ways it is rather surprising that we don’t see this more often considering the amount of feathered or furry ‘food’ that swims around here! 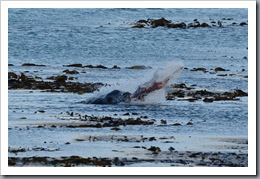 Because the lep is floating around in the water and doesn’t have opposable thumbs or a handy clasping foot it’s pretty tricky for it to rip off chunks of flesh to eat. The dramatic technique they have come up with is to grab hold of the end of their dinner and give it a good thrash. Bits of meat may come flying off, and the carcass is fairly well shredded. It also has a neat effect of skinning the carcass. I put a sequence together below taken at 6 frames per second which shows the thrashing quite well. 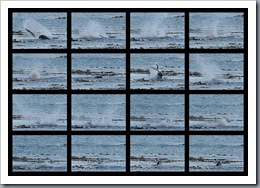