A busy end to the summer

What a busy end to the summer we have had, visitors coming and going, ships, weddings, parties. It’s about time for a holiday I think! 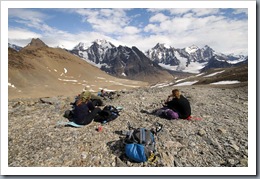 With the BAS ship JCR busy on science cruises and resupplying bases further South it was up to our Fisheries patrol ship to pick up some outgoing scientists from Bird Island at the North end of South Georgia. Having made the pickup they headed for KEP for a few days, before heading out with HMS Clyde, also visiting the island on patrol.

The three visitors were Cat and Hannah, w 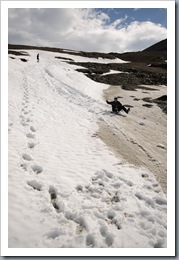 ho had been doing research for their PhD’s for the summer, and Mick who has been the Seal field assistant for just over the last two years. They had a busy few days here, out walking with us up to Glacier col to go sledging, helping me with the Fur Seal pup weighing, and a quick 3 day trip to St.Andrews bay to see the King Penguin colony.

Even in the year that I have been here I am sure that the remains of the glacier at glacier col have shrunk substantially. It definitely didn’t used to have the holes in it which it now has, anyone who doubts that our climate is changing rapidly ought to come down here so I can bang their head against a glacier! As the weather has been fairly chilly recently there were a few patches of snow around, so we got out the baking trays and did some sledging, definitely good fun! 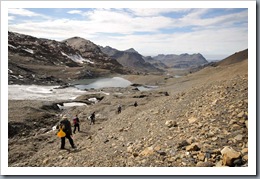 Walking past where there used to be a glacier 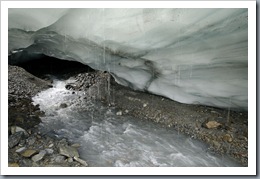 Water pouring out of the glacier 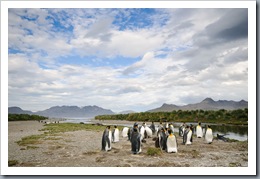 Penguin river lives up to its name! 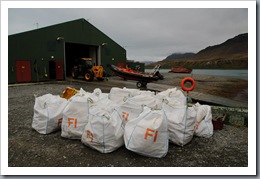 HMS Clyde whilst on patrol down here paid us a visit. Fortunately she was able to come alongside our jetty, so no ferrying the navy back and forth so that they can have a shore visit, always a bonus! While there were so many hands around we did a beach clean at Discovery Point. Insulating foam from the wreck of the Lynn has started to be washed ashore after she broke up in storms a few weeks ago. You can see from the number of sacks that we picked up quite a lot. The navy were very helpful in using their rigid raiders to assist in this too, which meant we could clear up some spiky bits of metal too without risking puncturing the sponsons of the RIBs. The Clyde also brought in 3 bomb disposal workers too, so they were off and about destroying unexploded ordinances. We even got to help out, but that can go in another blog entry! 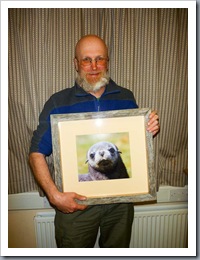 We have also had a birthday recently. It was the turn to celebrate of Ernie our generator mechanic. He has a wealth of Antarctic experience having worked at Rothera and Halley, and is now at the best base of the lot ;-) With a fondness for Fur Seals I made a frame for a photo of a furrie pup taken by Katie to give as a present from the base. A number of people, including the birthday boy himself commented on the similarity in appearances between our mech and the pup!

Having had extra people on base most of the summer it was time for them to head back to the Falklands and the UK. As a parting celebration we had an impressive bonfire on the beach with everyone in attendance. With the base much quieter there is a definite quiet winter feeling which is very pleasant after the busy summer! 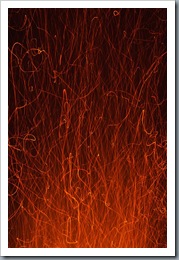