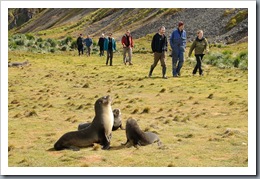 One of the visitors to our base this summer has been a young kiwi called Kalinka. She has been working on eradicating invasive plants, collecting genetic samples from rats, and is now part of a field team looking at mouse distribution at a couple of remote locations on South Georgia. She decided that this would be the place to get married, and so when her other half came down to join up with the mouse team they were duly married! 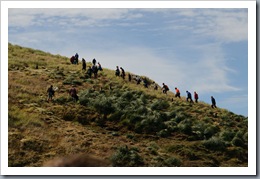 And what a busy day it was! The fisheries patrol ship docked in the morning, then there was cargo to sort, then the wedding, then in the afternoon they were off into the field!

The wedding ceremony was held up at Hope Point, just up the hill above Shackleton’s cross on a small flat area of grass. The day could not have been more beautiful, sunshine, blue skies, a few nice white clouds, the sea, snow covered mountains, and excellent company. There can’t be very many weddings where the bride, groom and guests have to dodge through growling Fur seals! 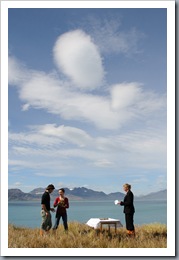 A casual dress code was ordered by Kalinka, and for most people working this simply meant downing tools and heading up to the ceremony, boiler suits, wellies, wooly hats, all were welcomed the same.

The service was performed by Sarah Lurcock, whom as well as being in charge of the Museum at Grytviken is also the registrar. The witnesses were Jude Brown (the government fisheries expert) and Andy Black (the government bird man).

We all watched as the happy couple said a few heartfelt words to each other, took their vows, and were pronounced husband and wife.

After the compulsory group photos everyone made their way down to the base veranda and I was left to take photos of the happy couple having volunteered my services as ‘wedding photographer’. 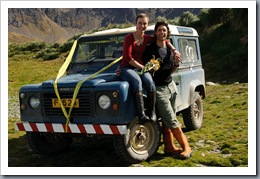 Waiting at the end of base was the wedding transport, the builders landrover, with a specially painted front bumper, shaving foam, hazard tape rib bans, and a trail of tin cans! Fortunately (the driver managed to conk out twice ;-) the journey was only about 200m to the veranda, where there was a lovely wedding cake, and a marvellous spread for lunch.

Even the wildlife wanted to join the celebrations, especially if there was any food left unattended! 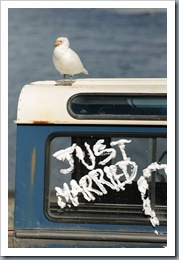 Congratulations to you both. 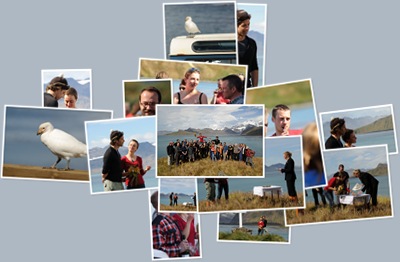