Around Grytviken at night

Having taken quite a few night time photos from base of the Milky Way I decided it was time to venture over to Grytviken. Without the moon the stars seemed brighter than ever, and with a bright 1 million candle power torch I could even light up objects from a distance. 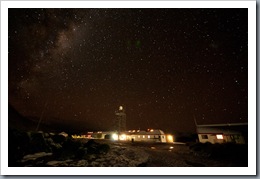 Last photo of the night of base

Heading over to Grytviken there are plenty of opportunities that catch attention. The shipwrecks, the machinery, the church, whalebones all cry out for something to be done with them. I thought that the milky way looked a bit like smoke rising up into the sky, so tried to incorporate this idea into some photos. 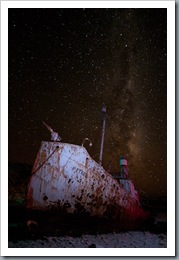 The red and green navigational leading lights caused some interesting lighting effects. I tried not to let them become too strong though using the cool LED light from my headtorch. Exposures were 30sec and the iso was set quite high, so not much light was needed. 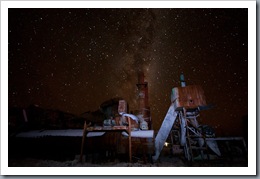 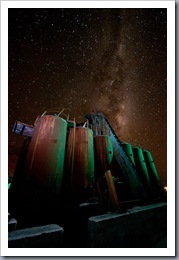 I ventured a short distance up the Gull Lake track to look over Grytviken and back towards vase. It was a good vantage point, and I could use my powerful torch to light up the buildings. Some of the photos looked like the base was being beamed up to a space ship. 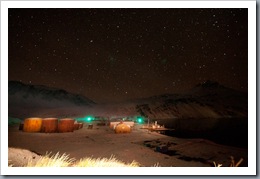 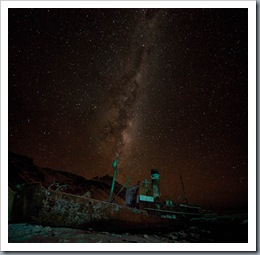 Something I have started to have a play with is large panoramic images. At night these are particularly tricky as joining up the multitude of stars accurately is a bit of a nightmare, and that’s before distorting and blending all the files too, this image was composed of 14 individual frames. Some software helps a little, although I still had to manually input control points. I think the result was pretty good though, it would look great projected onto the inside of a planetarium. 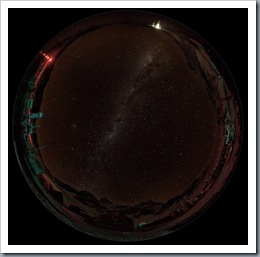