Ever since people have been visiting Antarctica it has been a tradition to celebrate mid winter. In the Northern hemisphere Christmas and new year celebrations brighten up the winter, but they fall in the middle of our summer here in the Southern hemisphere, so we turn to midwinter to mark the solstice and for those further south the start of the return of the sun, and a good excuse for a party. 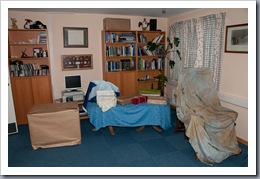 One tradition in BAS is that winterers make one other person on base a mid winter present (MWP). We picked names out of a hat months ago, and have had time to plan, design and create. As time passed little signs appeared all over the place, MWP stuff keep out, MWP in progress keep out, on boxes, cupboards, doors and dust sheets. Everyone has been getting quite excited about who had who, and what everyone had been creating. Everyone has put a lot of time, thought and effort into their gifts, and the results were all amazing.

These photos don’t do the gifts justice, they are quite stunning. Many, many hours of careful work, blood, sweat and tears (all literally) have gone into them, and they will all be treasured.

Following the exchange of gifts we had our traditional mid winter swim. Everyone (apart from Robert the Gov Officer) was pretty daunted by the prospect of jumping into freezing water, although the worst part had to be walking across the sheet ice between the sauna and the sea. Ah the sauna, I don’t know how well humans work as heat batteries, but we were going to try anything to reduce the pain! After a few minutes heating up we slipped and slid our way down to the beach, posed for a group photo then ran into the sea for a very brief swim. Unsurprisingly we didn’t stay in for long, and were soon making our way back to the sauna, but not before a few of us rolled around in the snow. This wasn’t the best idea, the melted and refrozen snow being something like abrasive sandpaper, I guess we’re well and truly exfoliated now. A beer and some mulled wine in the sauna warmed us through again so we could start preparing our evenings feast. 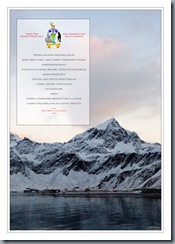 Dinner was a grand team effort with everyone doing their bit to make sure it was a suitably splendid feast. Matt boat and I were in charge of decorating the dining room, making the menu and setting the table. I also had to make Yorkshire puddings. Well, in the heat of the decorating I clean forgot the Yorkshires, a sprint to the food store and Aunt Bessie saved my day! Having had a look at the design of the menu used on Scott’s Terra Nova expedition I followed their style in creating our menu, and some of our food took inspiration came from their meal too. Roast Lamb, beef, pork and turkey, roast potatoes, roast vegetables, stuffing, lots of wine, champagne, liqueurs and a baked Antarctica were just some of the delights of the feast. 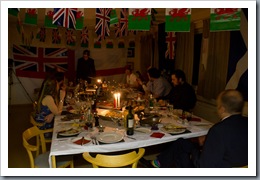 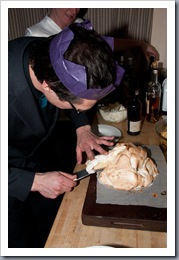 Having eaten our fill we headed over to the communications room to listen to the BBC World Service mid winter broadcast. With customary Champagne in hand we listened to the HF radio crackling away with messages from family, tunes that we had picked, and messages from guests and celebrities. This is a long standing tradition with BAS and the BBC, and is great to be a part of it. After leaving the comms room we headed back to the lounge for more drinks, snacks and to listen to the broadcast over the internet minus the crackles! 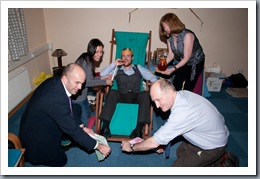 Putting the Government officers and their partners to work!

The rest of the evening was spent drinking, eating and chatting away the hours. We even called Rothera and Bird Island who were both having as good a time as us, although Katie managed to forget speaking to Rothera the instant the receiver was put down! It was a great way to finish to a truly memorable day. Cheers everyone! 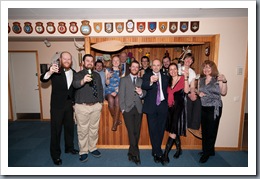