Last month Tommy, Rob and Ashley went on a camping trip to the Greene peninsula, by the time the guys had broken through the sea ice with the RIB’s to collect them the light was beginning to fade an there wasn’t time to collect their stash of gear from the glacier. This was good for me as I got to go out later on a mission to collect their gear. It was a stunning day so Ashley, Tommy and Sam took to one RIB, and Rob and I took to the other.

Heading into Morraine Fjord we were breaking through sea ice, and avoiding the bigger bits of glacier ice. A short was into the fjord we spotted a Leopard Seal asleep on a piece of ice; they can be individually identified by the patterns of spots on their skin, so we went for a closer look to take some i.d. photos. The Lep looked to be in good condition (nice and fat), and was obliging for our photo requirements! I feel very lucky to have seen such an awesome predator, they are a stunning creature, despite their slightly 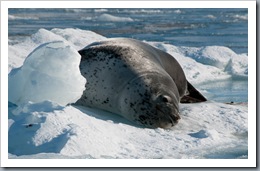 menacing smile. I certainly wouldn’t want to be a penguin with one of these chaps around!

Further up into the fjord there was a second Lep, again looking nice and plump. Over the summer there was plenty of krill around, and judging by the condition of the seals and penguins it must still be here. This is great news for the coming breeding season as the animals will start off in good condition. 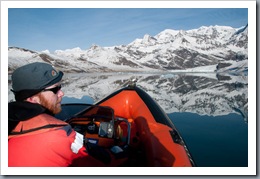 Heading further up the fjord there was plenty  of sea ice, Tommy was driving the first RIB through so I just had to follow the path he had cut, this was quite slow going, but worked well. In a few places there were some ice free patches of water, they were perfectly still and the reflections were stunning, it was a lot quicker to go round the ice in the clear water too. As I was driving Rob got to have a play with my camera and took some really nice photos, so I now have some photos with me in them! 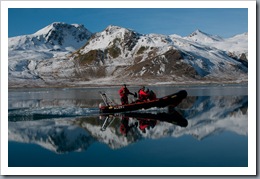 Eventually we reached the equipment depot, where Tommy and Sam went ashore. This was easier said than done as the ice meant you had to lift your legs entirely out of the water to step forwards, it was as if they’d just stepped right out of the ministry of funny walks. 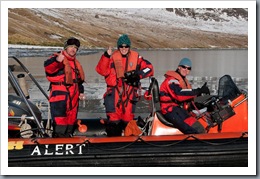 Having picked up the gear we made use of the beautiful weather and went up to the Harker glacier. Sitting a safe distance away we were able to shut down the engines and sit watching and listening. All around the glacier ice was fizzing and popping as bubbles of 10,000 year old air trapped inside it were released from the melting surfaces. Every now and again we would hear a louder crack from the glacier, and sometimes a chunk would fall off and crash into the sea. One larger noise was particularly intriguing as nothing seemed to happen. Then bursting up to the surface like a surfacing submarine we saw the chunk that had broken off, rather than falling off the top it had broken off the submerged part of the glacier.

The drive back was a bit quicker, Ashley driving the lead boat, and having a better idea of the ice conditions. Rob was driving our RIB this time so I was able to take some photos of him driving. It was a stunning day to be out on the water, and really shows us how lucky we are to be able to work (and play) in such an incredibly beautiful place. As in all good stories we were home in time for tea, cakes and lashings of ginger beer. Well, a late lunch and a cuppa anyway!

360 degrees at dawn from the beach outside base