I thought I better put up some photos of my work. Admittedly this is part of my job that I am quite fond of! Having been to see if one of my GPS tagged seals was back there was time to sit with the Fur Seal pups and enjoy watching them. Once they are a month or so old they start to go exploring a bit, and learn very quickly how to swim very proficiently. They play around together in the lake, the water seems to boil with them. 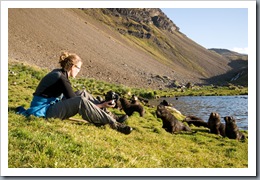 Sitting quietly beside the lake the pups get really curious. Being tall to a seal is quite a threatening posture, so sitting down they are much less disturbed. The pups come up and sniff at your boots occasionally having a bit of a taste. Sam (the base doctor) came with me and took quite a few photos of the pups. The following photos are taken with my 10-20mm lens. 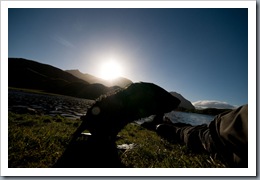 Fur Seals don’t have a great reputation. Most people think of them as vicious angry beasts, and I admit I did think this when I first started my job down here. Most people only meet a ‘Furry’ when they are jumping out of their cruise ships zodiac onto a beach full of seals whilst trying to get to whatever is on their list of things to see that day.

To be fair to the seals, the beach is their breeding territory, males fight aggressively to win and defend their territory and harem, and unsurprisingly don’t want to loose their place on the beach as this will result in having to fight, potentially to the death, to regain it later. Females are also defensive, they are either preparing to give birth, or have a pup, and are in a situation where males are jousting for dominance and space is something of a premium. For a seal and aggressive stance is to rise up to make yourself look big, naturally our standing position is taken as a dominant threat. A male seal will therefore treat you as it would treat any other aggressor and tries to drive you out of their territory.

Unfortunately most visitors to South Georgia don’t get much time to sit quietly and watch the furries and their antics. Sitting and watching you begin to understand what is happening, and you learn how to behave around them. Body language, posture and sounds are key, and as with most wildlife, if you just sit still and quiet you are no longer a threat and consequently ignored. 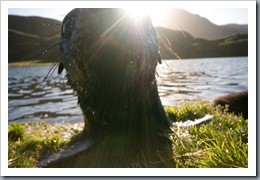 This curious little chap is just about to sneeze all ever my camera lens, a good reason to have a protective filter! 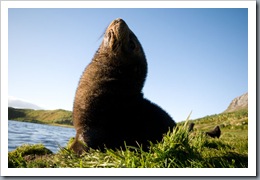 Handsome fellow enjoying relaxing in the sunshine, obviously not worried by my presence. 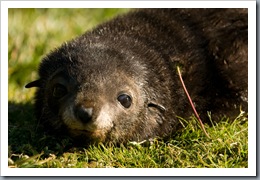 How can anyone not love these adorable creatures?!