Here at KEP we perform a number of important functions. Obviously there is the science work, but also we support the Government of Sough Georgia and the South Sandwich Islands (GSGSSI). The support we supply is mostly based on running and maintaining the base, and providing boat support so that the Government officers can visit ships and fishing boats year round.

From time to time we are asked to provide boating support to ships such as the recent RFA Black Rover, and Warship HMS Gloucester. This allowed their crew to get ashore, for training and a general look around Grytviken. Boats are also our only means of transport to the other areas within our travel limit, and so we often take the Government officers or members of the base off for their holidays. 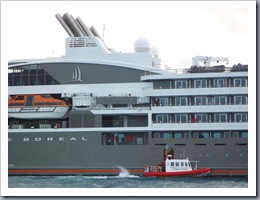 Coming alongside Le Boreal on the move to drop off the Gov. Officer.

On the base we have a number of boats. 2 jet driven harbour launches, 2 Humber attack RIB’s, and a little inflatable called Dotty! 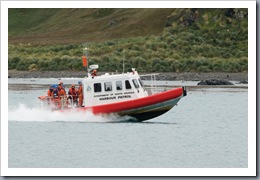 One of the Harbour launches

Powered by twin diesel engines the jet boats are fast, versatile, and very manoeuvrable. They have a good size cabin, air suspension seats, radar, sonar, charts, self righting, and possibly most importantly webasto heaters! Here at KEP is the first time I have handled a jet driven boat, and it is great fun. Being able to control the buckets on the jets independently lets you go forward, back, stop in a hurry, spin on the spot, and even drive sideways, rather handy when coming alongside. 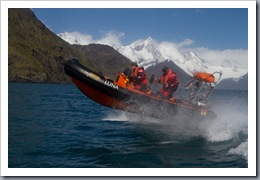 Taking off over the Harbour Launches wake

The RIB’s are used on a regular basis, especially for shorter trips, or when a beach landing is required. The two RIB’s have a very similar set up, Luna has two jockey seats, twin 40hp two-stroke engines, GPS, VHF, self righting, while Alert only has a single jockey seat. Unfortunately neither have heating! 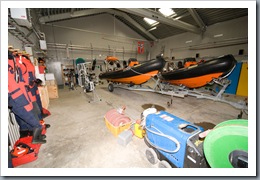 The boat shed is conveniently located right above the slipway next to the jetty. This allows easy access to the water, and allows the jet boats to be winched up into the shed when maintenance is required. Usually however this is where the RIB’s are stored along with spare engines, jet drives, survival suits, tools, the base gym and a table tennis table. The boat shed is also heated, so makes for a pleasant airy environment to work in, especially if it’s raining or snowing outside. 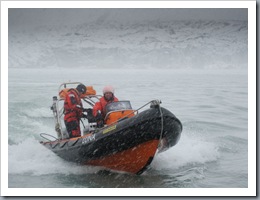 Boating in the snow – flippin cold and damp!

Because all of us non-boating staff have to help out with the boating work we are all trained to be crew on the Harbour launches. We have also all done power boating courses in the UK, and continue our training in the RIB’s down here with the Boating officers. For those people that have the time, keenness and aptitude training is also given to be a cox of the Harbour Launches. There is a lot to cover and learn, but it’s definitely good fun. It can be quite intimidating bouncing around in a good swell trying to come alongside a rather bigger ship whilst often still under way, but who could fail to enjoy boating somewhere so incredibly stunning: 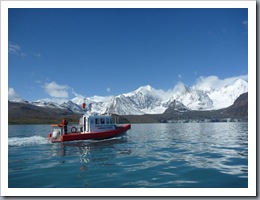