With the Fur seals getting into the full swing of moulting my tagging work had to stop. The tags are glued to the fur, so obviously moulting causes issues with the tags falling off. So once I had retrieved my two tags I took the opportunity to go away on holiday for a few days with two of my colleagues.

The Barff  peninsula is a popular holiday destination here on base, at one end is St. Andrews bay, famous for 150,000 pairs of King Penguins and hundreds of Elephant Seals; towards the other end is Rookery bay with it’s colony of Macaroni Penguins. The walk to St. Andrews is quite an undertaking with all the camping and emergency supplies BAS make us take, so we decided on a shorter hike to ease us in by visiting Rookery bay before the Macaronis finished breeding. So after a mad evening of packing Sam doc, Matt boat and I were fairly ready, excited, and had the name “team calamity” having lost the kit list 3 times in the field store alone.

Before starting our holiday we first had to visit the Greene peninsula to check some rat traps we had put out. Then it was off to Corral landing on the beach with the RIB and making sure we didn’t leave anything behind on the boats! At this point forgetting something would have been quite good, as our backpacks were topping 30kg, a mix of heavy winter standard gear, lots of precautionary ‘emergency kit’, and what most people might think was rather excessive amounts of camera equipment! 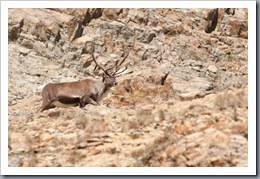 The walk from Coral to Rookery Bay started like most walks in South Georgia, by heading uphill. The route followed the valleys up to Rookery Pass, a rocky scree filled pass that took us several hours to reach. On the way though we enjoyed the scenery, and even came across part off the Reindeer herd. There is currently a substantial amount of interest in the Reindeer of South Georgia. On one hand they are an alien species that damage vegetation, cause erosion, and would prevent rat eradication by eating the poison bait and suffering terrible deaths themselves. On the other hand they are beautiful creatures that are part of the whaling heritage, and are the only reindeer not to be polluted by Chernobyl fall out. 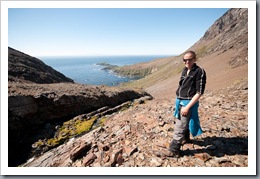 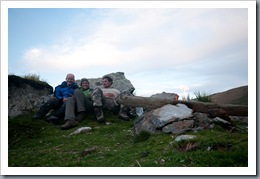 As we walked down from Rookery Pass (over some killer scree) we came to a grassy area and Gentoo Penguin colony. There were also more reindeer, although they weren’t particularly approachable and disappeared as soon as we got near. By now we were on the look out for a suitable camping spot, and just as we reached the tussac an ideal location appeared. A lovely flat area, sheltered by a large rock and small ridge, and fairly close to our water source too. This must have been a site used in the past, as there were some pieces of firewood stored in a small cave beside the sheltering rock. 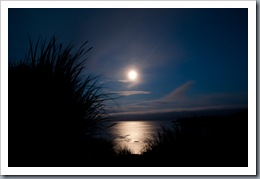 The moon over Rookery Bay

Our campsite turned out to be right next to the Gentoo highway between their colony and the sea. This gave us plenty of amusement watching the antics of the chicks chasing the adults down the hill begging for food. It also caused some confusion to the penguins, and a number of times they wandered into the camp to see what these strange things were that had appeared.

One of the main attractions of Rookery Bay is the colony of Macaroni Penguins that breed there. So on the second day we headed off after a “hot breakfast” rat pack, in search of the Mac’s. The walk was fairly easy going, the reindeer keeping down the vegetation, and creating handy paths to follow. Our first point of call was the “Launch Pad” where the Mac’s enter and exit the sea. There was a hive of activity, penguins hanging around, bathing, coming in from the sea and heading out to sea. The rocks were incredibly slippery with all the Penguin poo, and we had to be careful not to slip over or get caught by the swell. 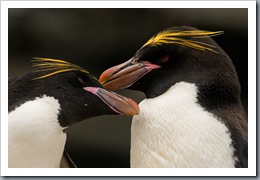 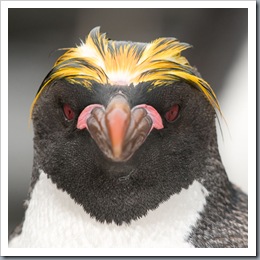 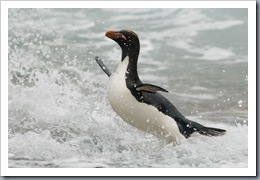 Watching the Mac’s scramble out of the surf, only to be side swiped by another wave showed how hardy these little guys are! 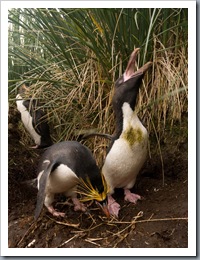 Nesting in the dense guano fertilised tussac I’m quite pleased I don’t have to count this colony of Mac’s! 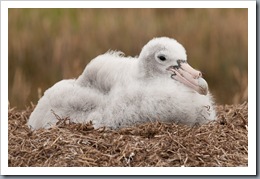 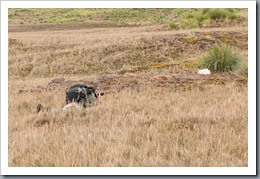 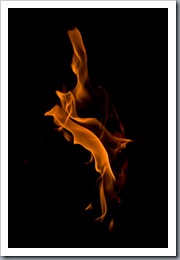 [photo]Rookery Bay, on our return from the Mac’s.

After a chilly and damp start to the day by lunch time things had brightened up considerably. After having a bit of a wander to look at Reindeer and the Giant Petrels we headed back towards our campsite. We wondered if it was possible to get down to the beach from the top of the cliffs, and a carefully chosen gully and tussac slope allowed us to do just that. The resulting walk along the beach was lovely, Furries, Ellies, Gentoos and Kings all on the same beach. We even picked up some more driftwood for the campfire. Having spent one day over at the rookery we decided to use our last day by having a relaxing morning, and then an amble back across the peninsula to Corral Hut. Having left some supplies for the next people to come out here (the next day), we had a nice quiet, slow wander up the unbelievably steep scree. The weather was fairly nice too, so we were able to take a break by some lakes, and pose for a group photo too! Away from the coast there is very little in the way of wildlife, so without any wind there was an almost eerie silence. That was until some grumpy Antarctic Terns appeared and started squawking incessantly at us! 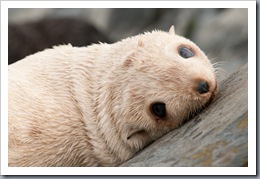 Back at Corral we had the afternoon to relax. Fur seals lounging on the beach, with pups playing in the water. There was even a blonde pup who wasn’t bothered by our presence and posed quite nicely for some photos. Having seen a waterfall from the boats as we arrived we decided to go and investigate. We found the waterfall, with plenty of water coming down, and creating a nice large plunge-pool. This obviously seemed like a bit of a playground for the Fur Seals, and they seemed to be enjoying leaping in and out of the waterfall. Having my waterproof compact camera I also decided to try and take some underwater photos. The pups were quite inquisitive too, so it wasn’t too difficult to take photos of them investigating me. 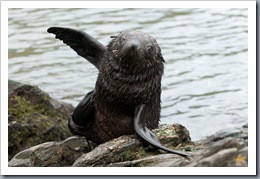 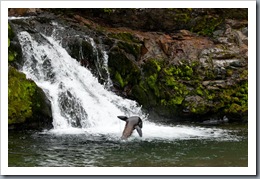 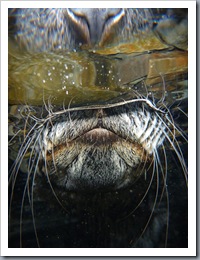 A Fur seal’s mouth and nose from underwater 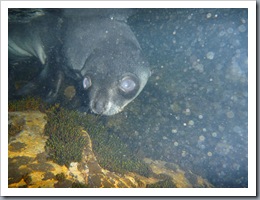 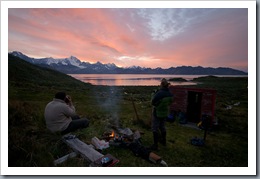 Back at the hut Matt created a nice campfire again, and I made us dinner. Dinner however got put on hold slightly as sunset developed rather spectacularly. It made a lovely change being able to see the colour in the sky over the mountains of South Georgia, rather than mostly being blocked out by them as from KEP. Fortunately the fire kept dinner warm (it was only rat packs anyway) and they were more edible after a longer soak too!

Such a spectacular sunset was the perfect way to end a really nice holiday. Wonderful scenery, amazing wildlife, and great company too. I can’t wait for my next holiday already!