As part of the rat eradication by SGHT the SGSSI Government and SGHT have been out monitoring for dead rats and also any ‘collateral damage’ in the form of poisoned ducks, gulls, skuas, giant petrels etc. anything that might eat the pellets, or eat poisoned dead rats. To help with this work I was asked to accompany the SGSSI ornithologist on a trip to the Greene peninsula for the weekend. 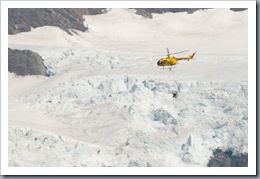 When we arrived on the Greene we offloaded all our gear into the small hut, and spent some time taking photos of the helicopters heading back and forth carrying out their final baiting runs in the area. During this time I noticed that there was also a VC-10 flying around. Below it coming around Sooty bluff I noticed a military Hercules, so I radioed base so they could quickly look out for it. There wasn’t much time though as it appeared out of nowhere! As it flew around the bay it called into the SGSSI Government by radio to say hello, and carried on it’s way around the island. 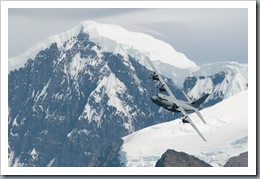 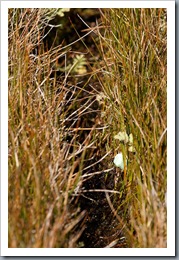 A rat bait pellet which landed in a rat runway

During the afternoon and into the evening I walked along a section of the coast looking for any signs of dead rats or birds. Although I didn’t find any I did find evidence of lots of rats, and perhaps most striking was the clear runways used to get from their fortress down to the shore line. Some of the pellets had landed in these, and the rats had already been collecting them and piling them outside their burrows. It was a beautiful afternoon, and a lovely walk to explore a new part of the island.

Looking towards the Thatcher Peninsula 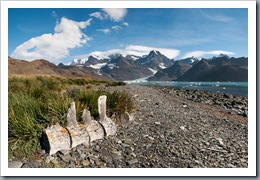 Whale vertebrae on the shore

The evenings meal was a frozen hot-pot which Ashley the boating officer had stashed in the freezer for just such an occasion. The hut was cosy, with an entrance/storage area, and in the main room 2 bunks and a cooking area/work surface. Complete with a Tilley lamp and a Primus is was home from home. During the night however the weather changed markedly, the wind picked up and it started to rain. 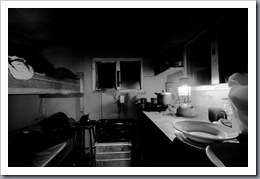 On Saturday the weather didn’t improve much, and it remained wet and windy all day. On the plus side this did give me plenty of time to read an interesting book by Tim Jarvis about re-creating the famous Mawson Antarctic Expedition sledging trip. I also used the time to create some time lapse films of ice blowing around the fjord, with the camera pointing out of the door trying to keep dry!

Looking back to Grytviken and KEP

Sunday however was a beautiful day again, and this time I headed down the peninsula towards the point and pintail ponds looking for anything dead. Andy had also seen some South Georgia Pipits down there, and I really wanted to get some nice photos. So off I went complete with 500mm lens, which doesn’t get as many outings as it should owing to it’s tendency to make you feel like an overworked mule by carrying it! 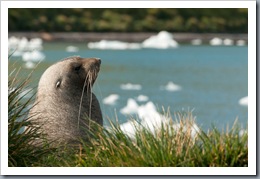 The wildlife was great for taking photos, the Terns especially so, although I wasn’t so lucky with the pipit and only got a fleeting glance as one flew past. Having had a nice mornings wander it was back to the hut for lunch and an early afternoon pick-up. Back to base to prepare for the following day’s Fur Seal pup weighing!