I was wondering what to do for my next blog post and thought why not have some photos about the non-seabirds of Bird Island. It’s a pretty short list, South Georgia Pintail, South Georgia Pipit, and Snowy Sheathbill. If you count vagrants, then this year we have also had 2 Barn Swallows and a Cattle Egret. 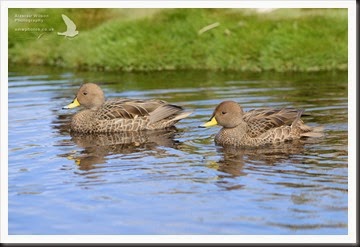 South Georgia pintail (Anas georgica). Population 6,000 pairs. Often treated as a subspecies of the Yellow-billed Pintail (Anas g. georgica), however differences in plumage, measurements, the number of tail feathers and geographical isolation are taken by many to suggest it is a separate species. 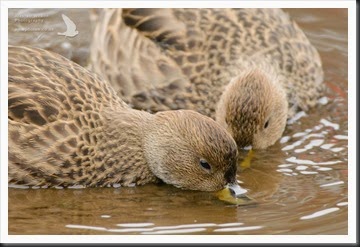 Feeding in the shallow pools behind base

Pintail feed mostly in the intertidal zone, in streams, puddles, and damp areas between tussac bogs. Some people claim this is the only carnivorous duck, about as menacing as they get is when three of them follow you along the coast, I haven’t yet seen one hunt down anything bigger than a bug, so maybe carnivorous is pushing it a bit, they are however known to eat the occasional bit of carrion. The chicks are only occasionally seen, little balls of fluff, speeding away through the tussac, while the female runs away flapping as a distraction. 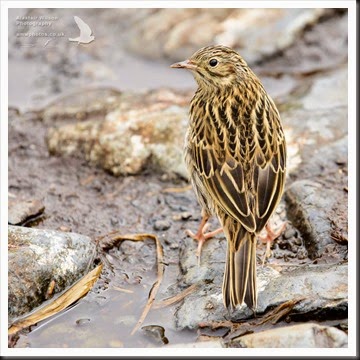 The South Georgia Pipit (Anthus antarcticus), the most Southerly passerine/songbird. Population 3,000 pairs. Like most pipits they sing in flight, and is the only true birdsong we get here. They nest in amongst the tussac grass and lay up to 5 speckled eggs. In the summer they feed amongst the tussac, but in winter when there is ice and snow around they move down to the shoreline. 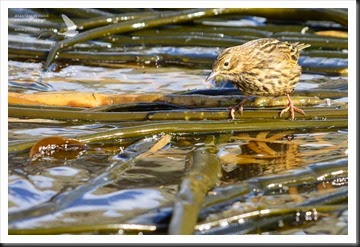 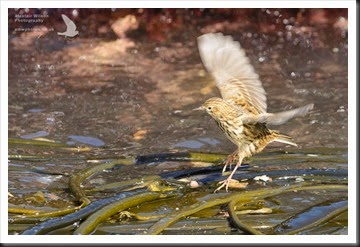 Surfing on kelp to catch insects

Pipits have been very much restricted in distribution to a few offshore islands due to predation by rats. However, now that the SGHT habitat restoration project has completed its rat eradication they should be able to recolonize other areas and become more widespread. 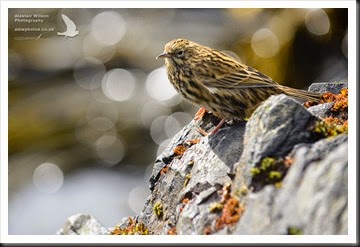 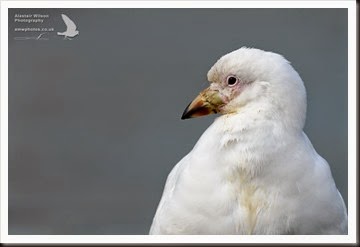 Snowy Sheathbill (Chionis albus). SG population of 2,000 pairs. An old nickname ‘mutt’ comes from the noise of the calls they make. They are often seen running around, rather than flying. When standing still they will often be on one leg, and happily hop around to move short distances. Sheathbills often get a lot of abuse for their habit of scavenging in penguin colonies and on beaches where they eat food scraps and poo. On the Antarctic peninsula this is the only species of bird without webbed feet! 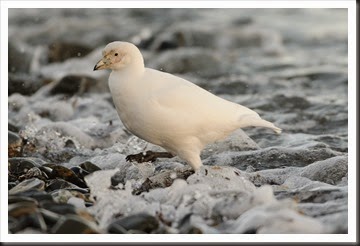 Running away from a breaking wave

Sheathbills nest in a crevice or space underneath a big rock. The nest is pretty basic, some stems of tussac to form a slight bowl and occasionally your glove if you don’t keep an eye on it! 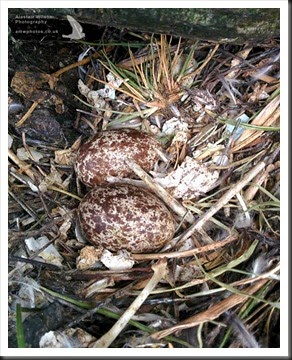