Although I’m now several thousand miles away from Skomer, bobbing around in the Southern Ocean aboard the James Clark Ross (British Antarctic Survey research ship), I thought I should finish my Skomer chapter before moving on to more recent activities.

Everyone knows about the Puffins and Manx Shearwaters on Skomer, but what about the UK’s smallest seabird, the European Storm Petrel? Weighing just 25grams, and only only a fraction bigger than a Robin, these birds spend their lives at sea, picking bits of food from the surface of the sea, and only coming ashore each year to breed. 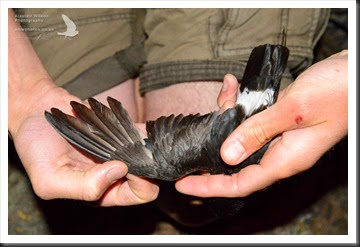 This Stormie was moulting 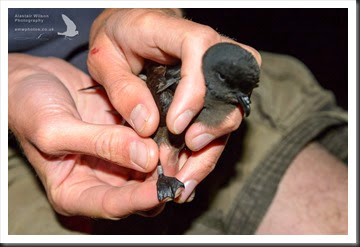 A Wilson’s Storm Petrel would have yellow webs. You can see the tiny ring which has a unique ID code printed on it.

Part of the monitoring work carried out on Skomer is to study the survival of Storm Petrels. They are carefully caught by trained people, ringed/banded, weighed and wing length measured, and released again. This happens once every 4 to 5 days for up to 4hrs so as not to cause too much disturbance. 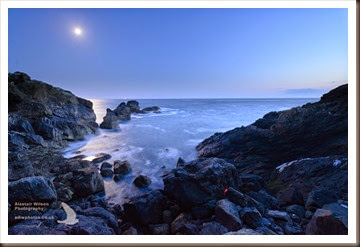 One of the nice things about staying up to do this work is being able to enjoy the night sky. Satellites, shooting stars, constellations, planets. 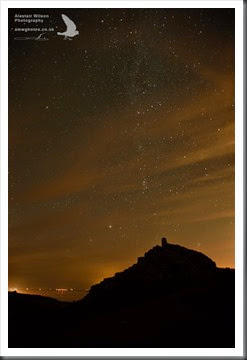 Looking out to sea Skomer has incredible views of the Milky Way, unfortunately look the other way and it’s spoiled by the light from the refineries and towns. On occasions the light from Pembroke and Milford reflect off the clouds, practically lighting up the island!

The Milky Way from horizon to horizon, with 2 stargazers

My last night on the island was clear, and after having a BBQ I was able to show the other islanders the rings of Saturn through a telescope, and we watched as the ISS chased by ATV5 cruised overhead.

Well, that’s Skomer done, now on to the next adventure!