Iridescent clouds and a trip to the beach 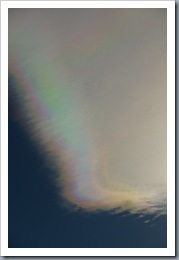 As it was a beautiful afternoon we were all sat out on the covered walkway alongside base, Pat even brought around a jug of his new home brew which was very tasty.

The edges of the clouds had a beautiful iridescent pearlescent colouring that gradually changed as the clouds moved.

With lovely weather forecast over the weekend a trip to the beach was in order. Jo one of the government officers, and her guest Will, had gone over to Maiviken on the Friday to stay at the hut. Katie, Andy and I snow shoed over to meet them at the beach, and took lunch with us. It’s not often you get to laze around on the beach here, it’s usually too cold, or the beach is fully occupied by the wildlife! 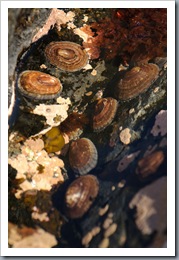 I couldn’t sit around on the beach for long, and soon enough I was exploring the rock pools. There were all sorts of different algae, and attractive limpets too. It was interesting trying to photograph them without getting too much distortion from the water.

There were a few Fur seals around, and the first of the Elephant seals, some of which had pups already. Gentoos, which have a colony a short way behind the beach, were coming in, porpoising, and then leaping out of the water to stumble up the shore. It’s great fun to watch, but really difficult to photograph well.

After spending plenty of time relaxing, we headed back to base in time for dinner. A very pleasant way to spend a day. 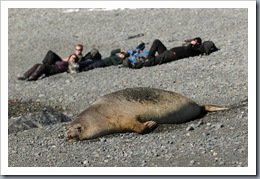 Sharing the beach with wildlife 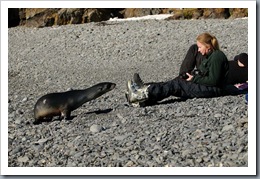 Curious fur seal having a sniff 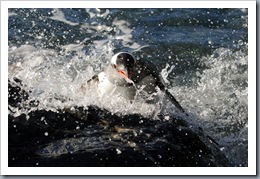 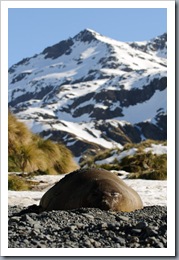