In wanting to have a go at some film photography I also fancied the idea of making my own camera. Obviously it would be difficult to use proper optics, so the sensible option is a pinhole camera. I had a medium format film sent down by my parents, which I wanted to use, but it was getting tricky trying to work out how to get it all to work, and wind on especially. So I had a go at making a matchbox pinhole camera instead. There are good instructions at http://www.matchboxpinhole.com/ and there are plenty of photos and other variations on this design available at http://www.flickr.com. 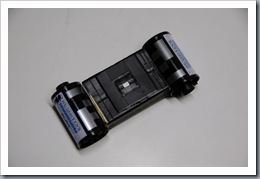 An old film canister to wind the film into, a matchbox with a pinhole made in an aluminium drinks can, and the full new film. Ilford 100asa black and white.

I didn’t take very many photos whilst making my pinhole camera, but thought I better have a couple to put on here. I won’t go through the instructions, but basically you make a pinhole very carefully in a bit of aluminium drinks can (mine is 0.15mm diameter), and put that in the side of a matchbox. Then you thread through a new film and sellotape it to the end of a used up film. Lots of black electrical tape makes it lightproof and a makeshift card shutter is all you need to expose the film. 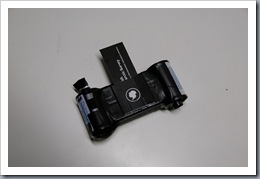 I cut a piece out of a BAS calendar to use as the shutter.

Apart from remembering to wind on it’s really easy to use, and you just count for a couple of seconds in sunlight, about 5 seconds in cloud, and several minutes indoors. The frames are 24mm square, so it’ll take a while to finish the film, but it will be interesting to see the results, especially the occasional double exposure!