Just a quick entry to say how things went yesterday. Plancius and their tug decided that they had a weather window to head for South America, so action stations were taken to assist them with lines and getting them away from the berth. 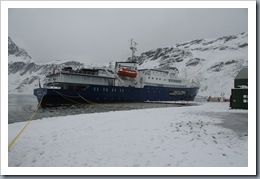 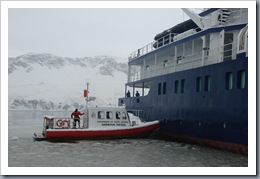 The stern launch pushed and tug pulled. With the Plancius directing power to her bow thruster she slowly edged away from the wharf with the bow launch giving a helping hand to slowly guide her into the middle of the cove. 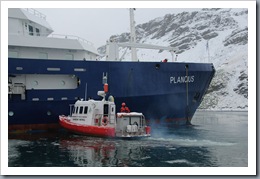 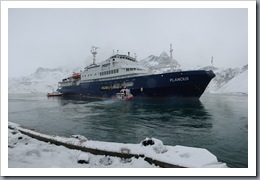 Plancius being pushed away from KEP wharf 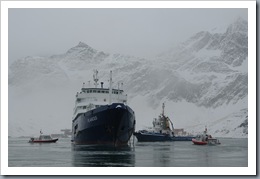 The ship was slowly turned around, and the tug gave a pull to stern to give plenty of room between Plancius and the wharf. The Plancius was then able to slowly motor out of the cove, with both Launches as escorts should assistance have been required, and the tug following closely to stern.

A very well done to everyone who has had an involvement with the Plancius and her time here, all the BAS staff at KEP, the government officers, the expedition staff, the ship crew, and anyone else I’ve forgotten to mention!

Obviously this event has some international news interest, and I am probably the only person to have photos of the event, so I would like to reiterate that all images and text are       copyright Alastair Wilson 2012,        no reproduction of any part is allowed without permission! Please use the contact details in the info section should you wish to buy a licence for use. Cheers :-)