Plancius and the Ushuaia

Today was pretty busy as shipping goes around here. The Fisheries patrol ship was in the bay, Plancius was alongside the jetty, the Ushuaia was coming in to pick up the passengers, the tug was here to tow Plancius, and the JCR came to do a bit of science work in Cumberland Bay! 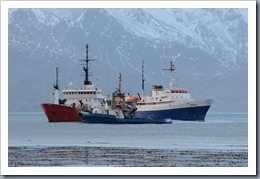 I made sure I was up and ready early so that I could take some photos. As ships have come through I’ve managed to photograph most of them, so now I’ve decided to try and photograph them all! It’s best to get them coming into the cove, as the angle is a bit better and you have the ship coming towards you. 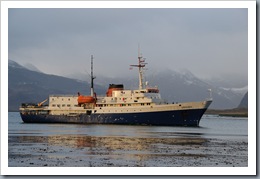 The conditions were excellent for the first part of the day, luggage and food was transferred off the Plancius onto the Ushuaia, followed by the passengers and the expedition staff. 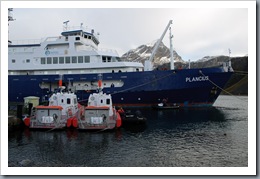 Before we knew it, they were heading out of the cove, homeward bound. Some of us popped out onto the back decking to give a wave, but apart from a couple of staff members there was no one else on deck to wave goodbye. They were probably inside having a briefing.

The cove was then clear for the tug to enter. Busy preparing the line for towing the tug anchored in the cove to await instructions. However conditions were on the turn. The wind was quickly picking up, and soon it was obvious that nothing more would be happening any time soon. The tug isn’t particularly big, and so they have to be sure that the weather conditions are going to be favourable before they leave. And hauling the Ushuaia off the wharf with a gale blowing her onto the wharf would be impossible anyway. 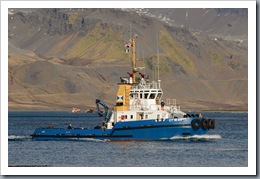 So we now await the next part of the story! Waiting for clear weather, and awaiting the return of the JCR who should be in on Friday to do the final supply of the base before heading back to the UK for the winter, our ‘Last call’, and the start of our winter. Should be interesting with a ship parked in the way, maybe we can keep it as a hotel for the winter! 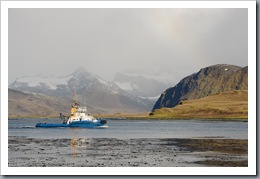 Otway entering the cove, with a hint of a rainbow