Having slowed down with the breeding season monitoring it was about time for a holiday. Every day we look out from base and see the Greene peninsula, and there are some nice looking hills there that I have been wanting to climb. 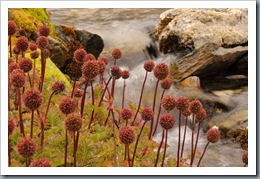 One of the most common plants on South Georgia is called Burnet. The green, lush leaves are a popular meal for the reindeer, this usually has the benefit of stopping it flowering. It may seem odd thinking of that as a benefit, but if you’ve ever encountered the flowers and seed heads you’d realise why. The spherical red flowers are very pretty close up and early in the season, but soon enough they develop harpoon like barbs all 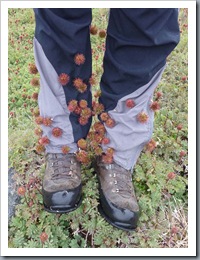 over, waiting to latch onto any passer by, birds, seals, people.

Once attached if disturbed the large balls break up into smaller individual seeds which can take ages to pluck off. Putting anything containing burnet in the washing machine is a terrible idea as it works into everything and you end up having to throw it away! This is especially so with socks. Well, although it’s annoying it’s just one of those things you have to put up with to go looking at glaciers, penguins and seals down here! Just be careful where you sit/lie down! 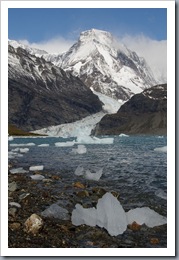 Walking along the shore of Morraine fjord up towards the Harker and Hamberg Glaciers there was plenty of ice littered on the shore. Unfortunately there wasn’t much calving action, but it was nice to sit and watch the glacier for a while before heading up the mountain at the south western end of the peninsula. From this mountain we could look down onto the Harker Glacier, and see right across the rest of the Greene. It was a great view. 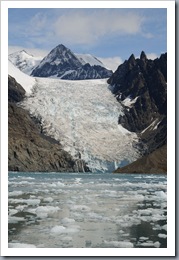 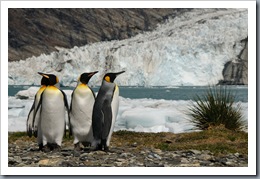 While I was taking photos for a 360 panorama Tommy heard an odd noise, on investigation it turned out to be a Snow Petrel chick! This was the first nest I’d ever seen, despite seeing the adults flying around the top of a number of other mountains in the area. The chick was quite contented in it’s nook, but kept a beady eye on us as we took a few photos. The walk off the hill was a good long skree run, which required a couple of rest stops on the way down. 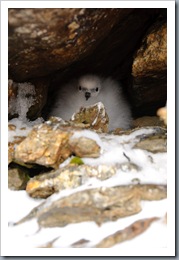 On the last day of the holiday we took it easy, and wandered along the beach to get a view of the Nordenskjold glacier. On the way round there was a section of the beach with a large quantity of washed up whale bones, driftwood and a couple of really old oil drums. I thought it made quite an interesting photo having the whale bones on the beach, and the old whaling station in the background. 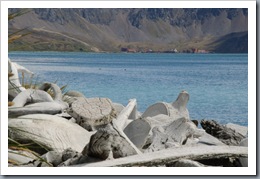 On the way back to camp we headed across an area called the Teal ponds, there were plenty of nesting Giant Petrels in the area, and lots more burnet too. We also discovered a big boulder that gave us a good hours entertainment rock climbing around and over it. The rest of the afternoon was spent with a couple of beers sitting outside with my book, a thoroughly good way to end a relaxing holiday. 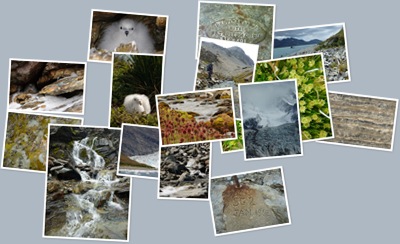