This week has been pretty busy with boating operations again. Taking one of the government officers out to do some GPS mapping work, and also ferrying around the two Norwegian reindeer experts who are looking at where they travel and how best to deal with their removal. 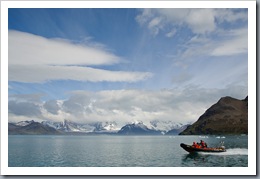 Taking one RIB and one Jet boat we headed over to the Barff peninsula whist the GO, Kelvin (invasive plant eradicator) and Matt boat went ashore, setting up the GPS and leaving it to make it’s recordings takes just over an hour, so we had a nice relaxing sit on the boat hanging around and enjoying the scenery. 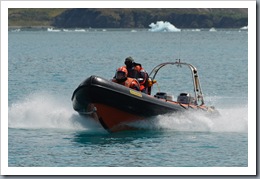 As I was busy driving the RIB Tommy had borrowed my camera and took photos from the Jet boat. We had a interesting ride back from the Busen having moved the reindeer guys. The flap on the back of the RIB that allows water to drain out had come slightly open, and wondering why we were steadily getting slower I looked around to discover there was about a foot of water sloshing around in the back! In the excitement of opening the flap fully to allow the water to drain away I also managed to pull out one of the engine kill cords, so had to start the engine again too. All good fun! 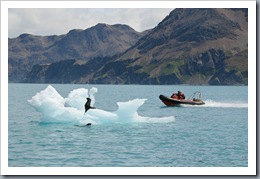 Fur Seal sitting on a nicely sculptured piece of ice 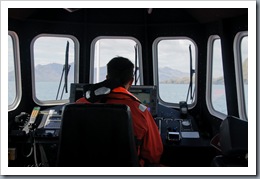 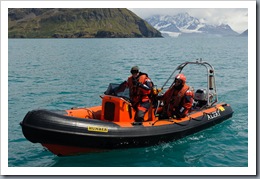 Me and Erny on the RIB (now minus 1foot of water)

There were plenty of seals in the water as we were driving around, several times both vessels had to swerve slightly to give them some extra room. They are usually quite inquisitive though leaping out of the water to have a good look, or just being generally curious.

Cruise ship on the horizon, and some curious furries