Over the winter we were fortunate enough to have some good downfalls of snow. This causes a few issues in getting around, as we have to take snow shoes, skis, avalanche transceivers, avalanche probes, snow shovels, warm clothing… getting around in the snow is also hard work, but it makes the scenery even more beautiful, and going down hill can be more fun too! 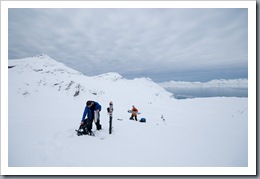 One beautiful day we decided to head off out skiing towards pinnacle pass. Tommy, Ashley, Rob, Pat, Sarah and myself headed up past Gull lake and into the lower stretch of the pass, on to some of the nicer slopes. Being a beginner Rob gave me a few pointers and I tried to sty mostly upright. I have to say I did a rather impressive face plant, but by the end of the day I had got to grips with turning left. Turning right still alludes me somewhat! 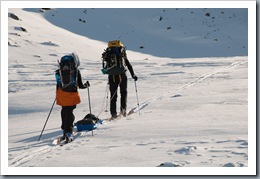 Travelling over to Maiviken to collect seal scats during the winter  is quite hard work in deep snow. Snow shoes or skis were order of the day and making it an over night trip provided some welcome time away from base. Skiing over in time to walk up Spencer Ridge, watching the Gentoo penguins come in to roost, and collecting scats before camping the night. Conditions were pretty much ideal on the first day, but the way home was mild, damp and the snow was like cement sticking to skins.

Tommy requested an expedition to stay in the sealers cave at Maiviken, so off we went on a lads winter sports expedition. Well, when I say sports, Tommy is a bit of a wiz on his snowboard so was doing most of the ‘sporting’ and I did my best to avoid falling over! 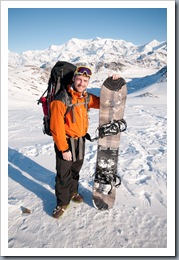 At the top of deadmans pass (Lewis pass) 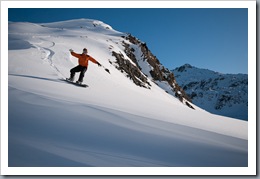 One of the gullies on the way had a nice steep snow slope, a cliffy section and some loose powder, so Tommy decided to have a play while I had a go at my snow sport photography. For a first attempt I was pretty pleased with the results, you can even read the make of the board. It was a stunning day, so spending some time playing around on the snow was definitely worth while. 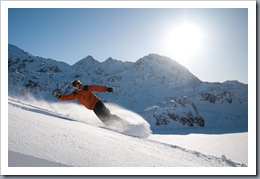 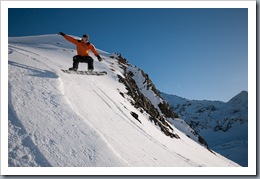 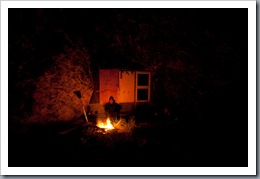 We picked up some gear from Maiviken hut, and some scrap wood too for a campfire in the cave. Because of the cold temperature and frozen wood it took a bit of time to get the fire going, spare wood was stacked around the fire warming and drying it ready to be burnt. While we cooked up dinner and drank port Tommy discovered his spoon was missing, so as anyone in the wilds would do we each whittled one out of some of the firewood. I was pleasantly surprised how well my spoon came out, Tommy’s snapped so I presented him with the one I made. He then went on to carve it a propper handle too. Tommy had made his customary tussac bed to insulate himself from the ground and smooth out any bumps. I opted to sleep on the wooden platform inside the cave, and had a very comfortable thermarest. 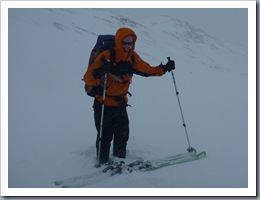 The next morning we headed back to base, although the conditions were pretty atrocious. Driving snow and low contrast made it almost impossible to ski, so we donned snow shoes to head down the hill and back to a toasty warm base.