At the start of October we were visited by the Governor of South Georgia, who is also the Commissioner of South Georgia and the South Sandwich Islands. While he was on base we took him out to see various local places of interest, culminating in a sail by of several of the abandoned whaling stations (Leith, Stromness and Husvik), and a visit to Prion Island in the Bay of Isles. This fitted in well with the Albatross monitoring work that I have been doing this year to monitor the breeding success of the the Wandering Albatrosses on Prion. 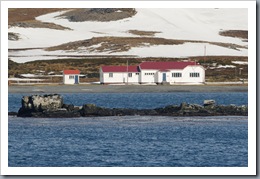 Managers villa, restored but plagued by Asbestos so out of bounds 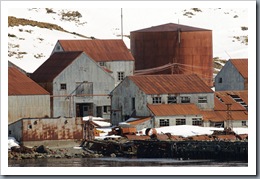 Many of the buildings are remarkably intact

For the Albatross monitoring work I needed an assistant, Katie was coming to do plankton trawls in the Bay of Isles as part of her long term monitoring work, so came to Prion too. As we are allowed to have three personnel off base at a time I asked permission from the government to bring an extra assistant. This was granted so a draw was taken to see who out of people that are in their last year of working here would be the lucky Prion assistant! Out of a hat came the name of Matt Holmes (mechanic).

October is towards the end of winter, and the chicks have started loosing their down. They spend the winter alone at their nests with parents visiting to feed them. Sometimes the harsh winter weather is their undoing, but this year all 25 chicks that were counted in April survived. There was still plenty of snow around at our visit, and we would occasionally fall into a soft patch, and sometimes get stuck too (usually that was Katie ;-). 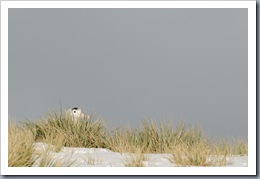 Getting the chance to see these incredible birds at this time of year is a rare privilege. Cruise ships visit during the summer months, but have to stay on a wooden boardwalk to protect the island from trampling feet. Being able to visit each nest, recording the presence of a chick, adults, snow depth, tussac condition, seal activity etc. while the chick sits completely undisturbed by your quiet presence is an incredible feeling. To think that all being well, and if they manage to avoid the hooks of longline fishing boats, these birds could reach 50 to 60 years of age! Locally they should do well at least, the long line fishery here in South Georgia is exceptionally well managed and regulated to preserve fish stocks and prevent seabird bycatch. Other areas of the oceans where these birds wander however are unfortunately a different story altogether. The Save the Albatross campaign by the RSPB and BirdLife is trying to change things for the better so give their page a read. 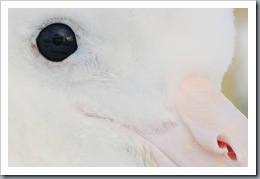 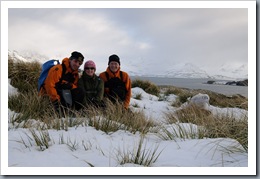 Matt, Katie and myself with one of the Wanderer chicks