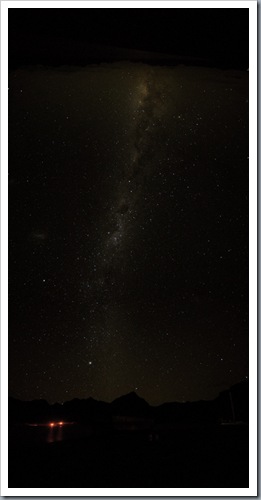 After a day of 30-40kt winds, sleet and snow it was something of a surprise to see crystal clear skies. Having had a look around the web at ideas star photography, in particular looking for a software solution to an equatorial mount I came across the blog entry Sleep is for Sheep. Their vertical panorama looked good and was something I had though about but not yet tried. It was still windy and freezing the knobs off the camera, but worth a go.

Trying to get plenty of detail requires either a slow shutter speed, a wide aperture, or a high iso. All of these have their advantages and disadvantages, and you are restricted to a maximum of a 30sec shutter if you don’t want to get trails, even at this speed you can still see trails on stars further from the poles. This means cranking the iso up to 32,000 and having the aperture as wide as I can go at f/4 on my sigma 10-20mm lens, and a 30sec shutter.

The merged panorama here has come out OK in Photoshop, but it’s not quite accurate enough for my liking, so I’ve been testing a couple of other panorama programs, PTGui and Autostitch. Autostitch wouldn’t do anything, PTGui required some manual input of reference points, but then did a really good job of the merge. Unfortunately it’s only a trial, but is widely regarded as one of the best photomerge programs available, and isn’t too expensive.

There are a few things that could improve the picture I think, have a faster lens and a less ‘noisy’ camera, but obviously these are costly. Other free modifications would be to also do some long exposures of a few minutes on both foregrounds to bring out the detail of the Fenix and two Gentoo penguins which you can only just get a hint of currently. Fortunately I’m here for another 20 or so months so should get plenty more opportunities! 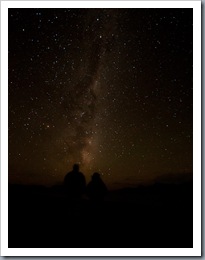 Having played around with some vertical panoramas it was getting a bit on the cold side, but before heading in I thought it would be nice to have a silhouette of Katie, the fisheries biologist who had come outside too, and myself in front of the milky way. It turned out OK too, go team science!