This next post was supposed to have been about Macaroni Penguins, but the miracle of a clear night happened, so I dashed out to take photos of the stars. It was breezy, cold, but pitch black and clear. The moon was at a minimum, and wasn’t visible in our sky, so the sky was as dark as it could be in the summer. Perfect for photographing the Milky Way. 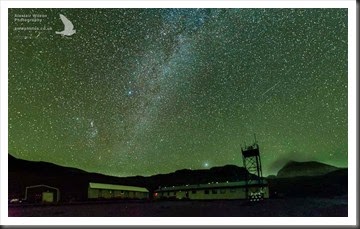 The base has very effective blackout blinds

Because of the seabirds coming in to their burrows at night the base has blackout blinds on all the windows and outside lights that are kept switched off in the summer. The base is very dark, making the night sky even better! In the image above Jupiter has just risen over Gazella peak, and there is a clear ‘air glow’ giving the green tint, which is different to aurora.

A 360 degree panorama from the jetty

From the end of the jetty you get a clear view of the island, and the night sky. I used this as the point from which to do a 360 degree panorama to view the whole night sky. I took 10 images which were carefully stitched together to preserve the constellations. The British flag was flying well in the wind, and I could feel the jetty vibrating too, thankfully though it didn’t ruin the images. 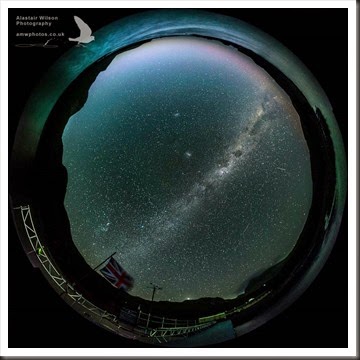 This round projection of the night sky uses the same images as the previous panorama, but displayed differently so that the sky appears as you would see it by looking straight up. If you look carefully you should be able to find the following features: Orion (upside-down), the Southern Cross, Jupiter, the Large and Small Magellanic clouds and several satellite trails. 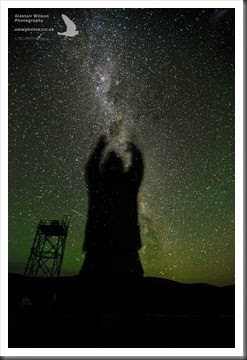 Reach for the stars

Lots has been happening over the last week with my photographs. I was very excited to hear that BBC Earth wanted to do a gallery of my South Georgia night sky photographs. The next thing I know and there’s an email saying they’re going to be featured on the main bbc.co.uk homepage too! Very exciting. 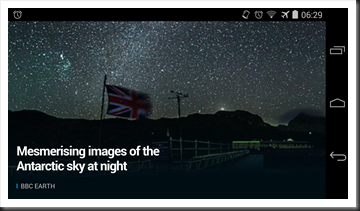 Top of the BBC.co.uk mobile homepage!

It’s been lovely to hear people saying lots of nice things about my photographs, and one of the best feelings to see them all over a website such as the BBC. Hopefully this might be the start of getting more of my photos seen by the public.