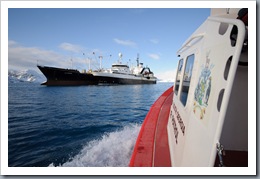 There have been some Krill trawlers around for a few weeks. Saga Sea, a Norwegian vessel came in to tranship the other day, and I volunteered to be crew for Matt boat. Whenever there is a transhipment the Government officer has to go out to take a fuel sample, and get various bits of paperwork sorted. As well as getting daily reports of catches, the quantities of product are also recorded. If there are any scientific samples these are also dropped off to us at the base. 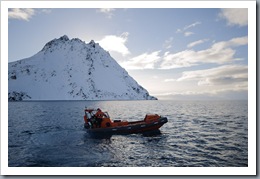 While the transhipment was taking place some of the crew visited the museum in Grytviken. They used their own ‘fast response boat’, which was anything other than fast. Their engine had given up, so they were using their 25hp outboard and could only go at 4kts. At one point they also started to sink, but worked out that it was a leaky elephant trunk, which when raised stopped the ingress of water. 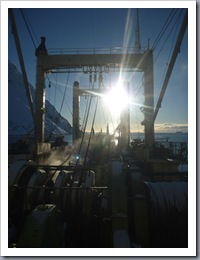 Another Krill trawler has also arrived recently. The Fukuei Maru is an old traditional krill trawler (the Saga Sea uses a continuous pumping method). I went on board with the Government officer to give her a hand with the inspection. Having spent a week last year aboard an almost identical ship (Gong San), and helped the previous government officer do last years inspection on this same vessel I had a good idea what to expect, and was able to point out the important features of the net that needed checking. The main feature was the Sea 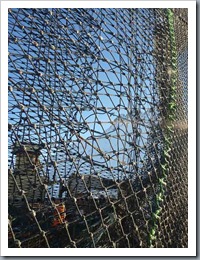 Lion Exclusion Device (SLED), which essentially is just a wide mesh preventing seals from swimming too deep into the net, instead they are funnelled towards an escape panel (pictured right). This is good news for the seals, as they don’t drown in the net, and good news for the fisherman as they don’t have a very angry or dead seal in the catch, it’s also a cheap and easy solution to implement to protect wildlife.

The Krill trawling nets are big, and usually you would get around 20 tonnes of Krill after trawling for around an hour. Shooting, hauling and reshooting also takes around an hour, giving around 12hrs fishing per day. The net is hauled on to the rear deck, and then emptied through a hatch into the factory below. In this way it is usual here to have a daily catch of up to 300 tonnes per day. These vessels have fairly standard nets and fishing gear, and lots of acoustic tech and a very skilled captain/mate on the bridge to trawl through the krill swarms, they can also carry on fishing when the weather starts to deteriorate.

With a continuous pump method the trawl net is deployed, and a long pipe goes into the cod end (the bit at the tail end of the net where catch collects) sucking out the Krill as it’s caught. The Krill then has to be sieved out of the water before being processed. This method allows almost 24hrs of fishing every day, and catch rates can be in the region of 600 tonnes or more a day. There are a number of technical difficulties with this method that need to be overcome. Turbulence in the net, pumping vast quantities of water/krill, slow trawl speeds, susceptibility to bad weather. The Norwegians however seem to have worked out most of this stuff, apart from controlling the weather! 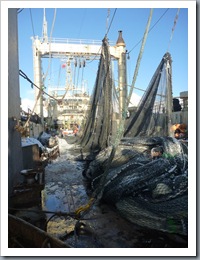