As I have been doing more and more panoramas I thought a panoramic tripod head would be quite useful to make the stitching process a bit easier, and more accurate. Panoramic tripod heads are available to buy, but they are pretty expensive (several hundred pounds), and it would take ages to deliver here anyway. So I thought I’d have a go at making one. 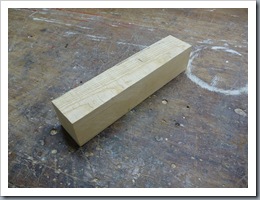 I wondered about wood or aluminium, and thought that wood would be nicer, and the base mechanic said we didn’t have any aluminium. I later found some suitable aluminium, but prefer working in wood anyway. 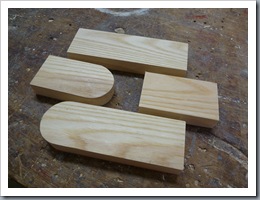 American Ash, cut to size and planed for the appropriate pieces. I used the lens table of focal points, available online to work out the dimensions of where my camera would need to be mounted, I have a Nikon D300 and mostly use a Sigma 10-20mm lens set at 10mm for panoramas. 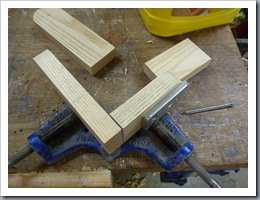 I used the aluminium quick release plate that I messed up in my last blog post, re-drilled it and attached it to the base piece. Having carefully cut the wood with a mitre saw I glued the base and side together using a 90 degree clamp to ensure accuracy. I reinforced the join with a piece of ash that I had shaped into a triangular fillet (which you can see in the next photo). I also drilled holes and put two screws in for good measure. 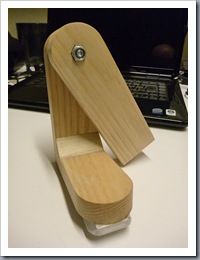 The swinging arm was attached to the upright using a nyloc nut, which I carved a recess for, so as it didn’t protrude. Rather than having to remove the quick release plate on the camera every time I made use of 2 threaded holes in it, I marked and drilled holes in the swinging arm and have 5/16 bolts in which I cut a slot into the head. These had to be accurately placed to allow 104.4mm between the swing arm pivot and the camera tripod mount. I had wanted to recess the swinging arm to accommodate the extra thickness of the quick release plate, as I hadn’t thought of doing it this way initially. Unfortunately I routered the wrong side. I chamfered the end of this mistake though, so it doesn’t look too accidental! And there was enough leeway in the base plate to not matter. 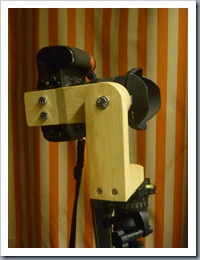 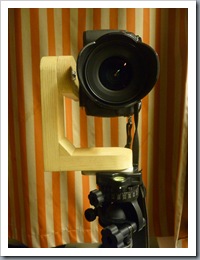 Now to go and see if it works, and I can also get on with making my mid winter present!