Having written the last blog shortly after my Krill Trawling experience I though I better do an update about my time on the trawler itself!

It was a busy weekend creating our entry to the Antarctic 48hr Film Festival, followed by getting up every couple of hours through the night to check on the status of it’s upload, then I was on earlies too. I went back to bed to get some sleep when the Fisheries Patrol Ship turned up and announced that it was taking me out right away to board a krill trawler! Unsurprisingly I was quite flustered and not best pleased.

I had been asked by the GSGSSI to board the trawler for a week as a scientific observer. They already had a Korean observer but wanted to carry out some extra monitoring for bycatch, seabird interaction, and Krill genetics. 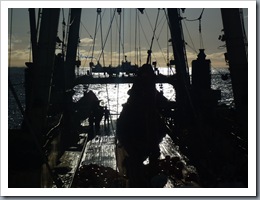 We headed out of Cumberland Bay, and whilst the ship was hauling it’s net and preparing for the next trawl I boarded. Being lowered off the FPV in the RIB was quite exciting, and we bounced over the waves to meet up with the Dong San. I had been briefed as to how to exit the rib, move to the bow when instructed, then wait until you get to the top of a wave, then climb the pilot ladder. I went up that ladder like a rat up a drainpipe, and landed on deck amongst a medley of Korean, Chilean, Philippino, and Vietnamese fishermen. 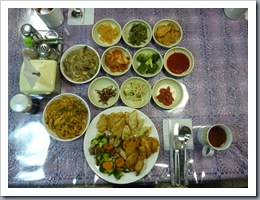 I was introduced to the Captain and some other officers on the bridge, and then shown to my cabin. The cabin was very basic, but comfortable enough, and came with it’s very own giant can of Raid cockroach killing spray. Unfortunately the head (toilet) and washing facility in my cabin had been demolished, but there were crew facilities just around the corner, they were um, very basic. Meals were served in the officers mess at 5am, 11am, 5pm and 11pm. The captain had kindly asked the cook to prepare more western, less spicy food for me which I was grateful for, but I also got to try a wide range of Korean food too. In the photo you can see my plate of food, ginseng tea, and a variety of small dishes which you share with the person opposite, and contains all sorts of extras. There was lots of fish, and freshies too which was a treat. I used the chopsticks almost all the time which was met with “you chopsticks very good”. 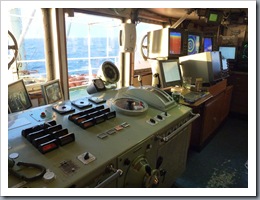 Having been built in 1975 this ship has certainly seen better days. The bridge was particularly interesting, old instruments and control gear sat next to modern state of the art acoustic fish finding equipment. The instruments pictured here look aft onto the trawl deck so that the captain can see everything that is going on, he controls the engines monitors instruments, issues commands for shooting, trawling depth and hauling the net which is operated from a winch house. He also issues commands for steering which is performed by a crew member looking out of the front of the bridge. 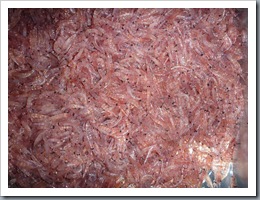 What this ship is all about, catching Krill

Despite being an old vessel the captain uses her to catch an incredible amount of Krill. Every haul brings up 15-20 tonnes of Krill, and the net is hauled about once every 45mins to an hour. Fishing carries on day and night as long as there is a Krill swarm to be fished. After trawling through a swarm several times it reaches a point where fishing it again becomes unpractical. Then the search starts for another swarm. Steaming back and forth searching can take some time, and it’s quite common for different ships to fish in the same area, even the same swarm.

There were two main parts to my observing tasks, watching the warp lines and net for seabird interaction and sampling the catch looking for bycatch. Watching the net and warps required standing at the stern of the ship watching whilst it was shot or hauled, this was a pretty chilly task, although I tried to avoid times when it was actually snowing. Checking the catch was a slightly more comfortable task based inside the ship. Situated just below two hatches at the stern of the trawl deck are the bulk storage tanks. Krill is emptied through the hatches into the tanks where it then goes onto conveyor belts to be processed. It was my job to grab a tray full of catch (10-12kg) and sift through it looking for anything that wasn’t Krill. In the time it took to process the 15 or so tonnes of krill I could go through about 4 trays of Krill, and usually found very little else. I then had a few minutes where I could watch the conveyor and pick out any other bycatch.

Because Krill farms dense swarms there is generally very little else present in the catch. Only at night did the occasional fish get caught too, often with a mouthful of Krill having been feeding on the Krill itself.

After 5 days aboard the hold was full and we headed into Cumberland Bay to meet up with a Reefer (refrigerated ship) to tranship the processed catch. Above is a 360 panorama of coming alongside. The reefer was alongside a tanker at the time refuelling, making the task slightly trickier. I was then picked up by the Harbour launch, and headed back to base for a nice hot shower. 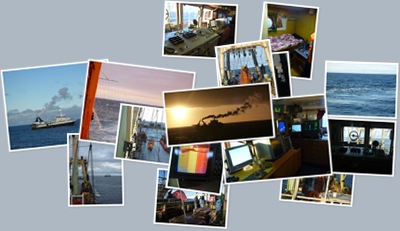