December is a busy month, while the UK gets hit by ‘the big freeze’ we are heading towards the middle of summer, and onwards with the breeding season. The beaches are bristling with with Fur Seals, Gentoo penguins have their chicks, Light mantled sooty Albatrosses are on their nests and the Terns are eagerly defensive towards anything that moves.

Fur Seal numbers are looking excellent this year, a very positive sign after the poor season last year due to a shortage of Krill. Peak pupping was around about the 7th of December, and there are lots of them crawling around the beaches and in the tussac. Getting about the beaches and tussac can be quite tricky with so many seals around, so care has to be taken at all time to avoid accidentally bumping into a rather grumpy set of teeth! Whilst the pups are very cute, they are born angry! If you pass close by one you are met with a feisty terrier like growling and bearing of teeth! Fortunately though they aren’t all that quick at moving yet (unlike the adults that are damn fast) so you have plenty of time to move on by.

Tortula, one of the study beaches

Part of my job at the moment is to keep a count of the number of Fur Seals. This is done by counting all the males, females, pups and juveniles in fixed study plots on the beaches marked out with small patches of red paint on prominent rocks. Using these figures you can compare counts between years, and estimate when the most pups are born. This date for peak pupping is used to decide when to carry out the annual pup weighing.

As well as being the zoologist I (along with everyone else on base) am also crew for boating operations, and get trained to be cox too. We have two very nice jet boat harbour launches, two RIB’s, and a tiny inflatable called dotty. One of the government officer needed to be taken around to Stromness to meet up with a cruise ship for an inspection, and I got to take the helm for my first trip outside Cumberland Bay, and into our extended boating limit. With a cruise ship alongside the jetty some tight manoeuvring was required, before we could head off out on our way. There was a nice bit of chop and swell around, which made progress fun, but we were soon at Stromness, ready for the passenger transfer. The cruise ship was a little bit late, but a good blast back along the coast surfing the swell got us back just before sunset.

On the way back from Maiviken after some Seal work Ashley, Rob and I took a bit of a detour into an area of lakes know as the ‘Lake District’. It was very pretty and there were some nice views back down the the bay and over the other lakes.

Looking down towards Maiviken from the ‘Lake District’

Having set off a few weeks previously a team of Norwegian Kayakers made it back to KEP having circumnavigated the whole of South Georgia. This was quite an incredible journey, and they did very well to complete the challenge in very good time. One casualty of the trip was one of the Kayaks which got rather too much attention from an Elephant Seal! The team managed to make a good repair though using all their spare fiberglass and epoxy, and completed the challenge. We used the celebration as a good excuse for learning how to use flares with the old out of date stock. 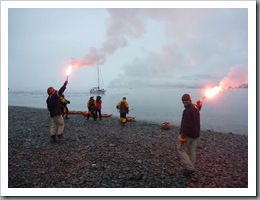 Welcoming back a team of Kayakers who circumnavigated South Georgia 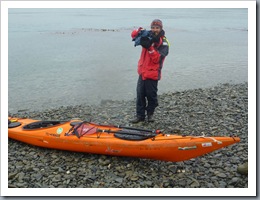 With life on base tending to revolve around our work a number of social events are regularly held. One of these is the Saturday night formal dinner. Three courses, smartly dressed, or following themes where everyone gets together. Tommy and Matt-mech organised a British Pub themed evening with great pub grub, fancy dress, bar games, and a pub quiz! It was a great evening, although I did get distracted briefly by some nice light and clouds, which I hope you’ll agree was worth while: 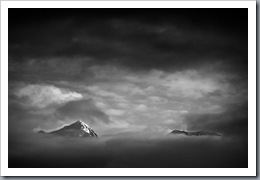