Hodges, the fast and the slow

Mount Hodges sits behind Grytviken, and rather dominates the skyline from KEP.  Standing at 605m tall it may not seem that high, but the steepness and exposure make up for extreme height. Most of the way up is over scree, through steep gullies, and over the occasional patch of snow.

Most people choose a nice afternoon or mornings walk up Mt. Hodges, but not the outgoing sparky – Richy. After coming to South Georgia 2 years ago Richy started running, and discovered he had quite a talent for it. In the SG expedition book is written an account of a speed ascent of Mt. Hodges, starting and finishing at the museum back door, with a record time set at just over 49mins. The Hodges Challenge as it has now become known was just too tempting, and before leaving the island he was determined to give it a go. 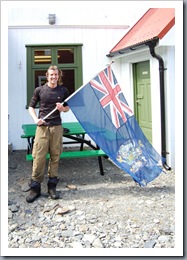 Richy after the run

After posting people at key points along the route for safety, the record attempt was on. Richy set off at a good pace, heading up the side of Mt Hodges, springing up through the scree. After just 33mins the radio call came through to say he’d reached the summit. Then came the downhill, we’re not really sure how he manages to get down a hill so fast, but after only 13mins descent Richy came running back to the museum. A new record time of 46mins 15sec was the result, an incredible achievement, hopefully to be recognised by Guinness World Records in the near future.

My trip up Hodges, if you haven’t guessed already was quite a bit slower, more of a steady siege than a high octane surprise attack! 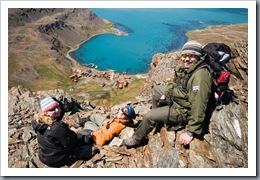 Lyndsey, Tommy and Matt above Grytviken

Setting off Saturday mid-morning, the first part of our walk was up to the summit of Orca, a peak on the side of Hodges, and overlooking Grytviken, and ideally situated for a rest and a bite to eat! After enjoying the views for a good while we continued up the steep scree to the summit of Mt. Hodges.

Looking down the mountainous spine of South Georgia

From the snow capped summit the view was stunning. It was pretty breezy, and disturbed snow blew around whenever we moved. There was enough time to take a load of photos though, and with the tripod buried in the snow we could all get in the shot. 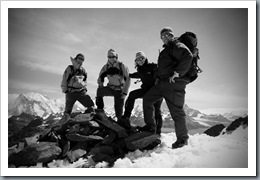 Tommy, me, Lyndsey and Matt on the summit

Getting back down was almost as hard as the ascent, negotiating some steep gullies and loose scree. Making our own way down the side of the mountain into Bore valley rather than following the standard routes was good fun and exercised our route finding skills a bit. We even found a nice snow slope to play around on and slide down. 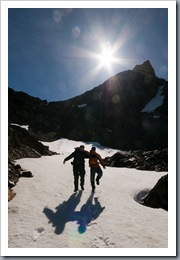 Orca and Hodges make up part of another South Georgia Challenge: “The 7 Peaks”. These are the peaks of: Duse, Orca, Hodges, Petrel 1 & 2, Narvval and Brown mountains. And the challenge is to climb them all in one day. While we were on our jolly up Hodges we had a great vantage point to see a number of the ‘old crowd’, (who would be departing 2 days later), make use of the great weather and successfully completed the 7 peaks. That’s is a hill day I am really looking forward to doing, stunning peaks, some exciting snow runs, and some great views (fingers crossed)!