I did promise to put up some photos and some information about the Storm and Leach's Petrel ringing, so here it is! I've been a bit slow about it as I have just been on training to start work for the British Antarctic Survey, at King Edward Point, South Georgia. I'll have to put all about that up next now won't I!!

There is something great about going out to try and catch Storm and Leach's Petrels. Heading out in the late evening to a remote headland, setting up the nets, and setting the tape lure playing the eerie calls out over the sea to entice in these almost unbelievably small ocean wanderers. 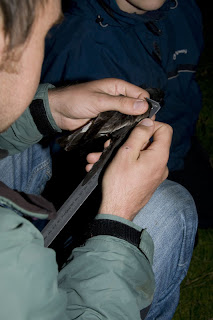 Measuring the wing length
It didn't take too long for the Stormies to start appearing. They have an almost moth or bat like flight, flying around investigating the noise from the tape lures before flying into the net. Carefully and quickly they were removed from the net, carefully placed in fabric bird-bags, and then taken to the ringing station for processing. After some time, our first Leach's appeared! Success, and a great deal of excitement too, especially for those of us who hadn't seen them before. 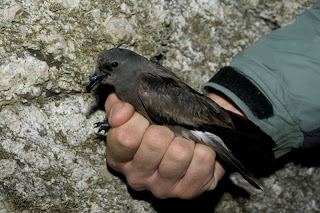 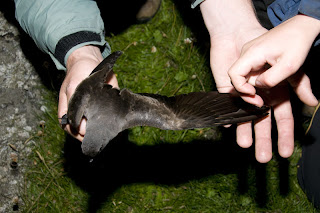 On occasions it was possible to see the Petrels against the sky as the flew around and into the nets. Leach's Petrels were especially notable due to their bigger size, and they were also heard calling on a number of occasions, an amazing sound indeed! 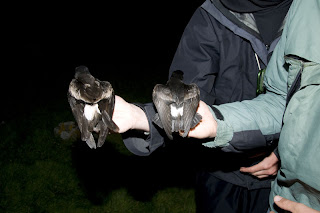 Comparing the size difference of Leach's Petrel (left) and Storm Petrel (right)
I was lucky enough to help out with the ringing over a number of nights, and finished in the early morning as it began to get light at around 3:30am. They were long nights, but a brilliant experience and well worth the effort. 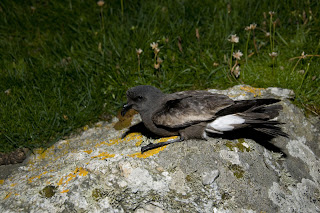 Leach's posing before dissapearing into the night
Cheers Will and Rory for a great time :-)
Posted by alastairwilsonphotos at 17:54