With the prospect of two weeks in West Falkland followed by an almost immediate transfer to a trip to Beauchene and Sea Lion Island with the Shallow Marine Survey Group there was quite a bit of juggling of kit to be done, with particular attention to camera gear as the FIGAS weight limit is only 20kg.

All the gear, food, plant 'stuff', camping stuff, fuel etc was loaded into the red FC Landrover and we gave it the once over. Early on the 29th Nov I set off for the Ferry terminal at New Haven, the reverse on, drive off ferry was pretty basic but functional, and there was tea and coffee available too. 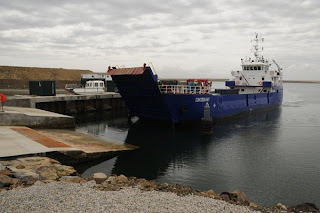 This ferry is rather multifunctional serving lots of the smaller islands so some of it's work is as a bit of a 'landing craft' affair. Unfortunately this makes it a bit of a rubbish ferry!! When the Shetland ro-ro ferries are running in a force 10 this thing wimps out in a stiff breeze! Seems a bit of a bad plan in such a windy place! Maybe there is a good case for a proper ferry and a landing craft?

Once at Port Howard I bought some bread having left it in the freezer in Stanley, and headed on my way down to Port Stephens at the other end of West Falkland. 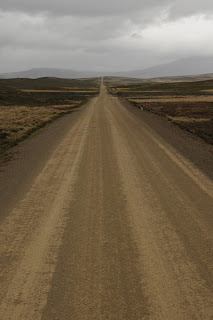 A rather straight road!

The road network in the Falkland Islands is a fairly new thing, this is especially so in West Falkland. The tracks are pretty good in most places, although there are some rutted sections which you have to be careful of. 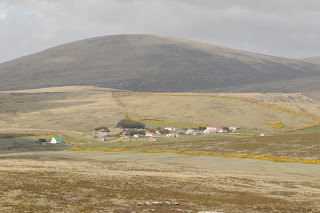 Most settlements are much emptier than they used to be, farms have less sheep, bikes have replaced ponies, people have headed off to Stanley. Port Stephens is a beautiful place, the rock formations are incredible, lovely hills, and a beautiful sea. 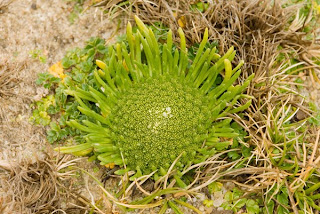 One of the attractions of Port Stephens is the False Plantain. This is the only place it is found, so it was something I thought I'd go and find. Armed with the GPS coordinates I headed off. It was fairly breezy, and after a short while the heavens opened and added a nice dose of rain into the bargain! I carried on anyway, past a Gentoo colony, past the rockhoppers, and on towards the False Plantain. The erroded sandstone formed amazing features, and I was given a heck of a fright when 2 goats appeared behind me! They followed for quite a while and are apparently pets that have been put out to graze! Well, bang on coordinate there were plenty of False Plantains, small and large, and some coming into flower too, quite a neat little plant really. 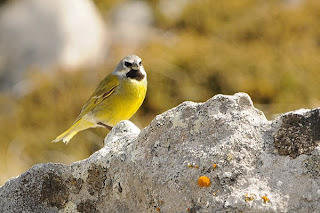 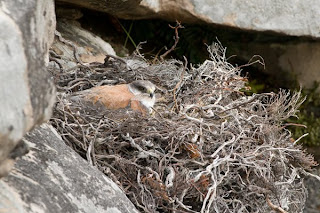 
Went for a walk up to Hawk's Nest, and surprise there was a Hawks nest! The cliffs were only small and you could get fairly close without causing any bother which was great.

After my few days at Port Stephens I headed up to Roy Cove to pick up Rebecca who was flying in on one of the FIGAS Islander flights that serve the islands. The accomodation there was really lovely, and a beautiful view out over the sea too. We were also supplied with fresh milk and some lovely diced lamb and mince. There was a cheeky little Meadowlark that enjoyed battering his own reflection on the windows. He was quite happy to have you watching closely and was often there while we made sandwitches. 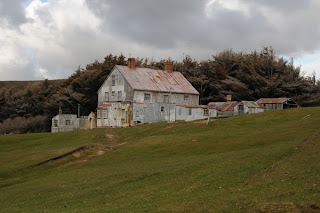 
The big old farmhouse at Roy Cove with a good sized copse of trees behind. These were full of Siskins, Finches and Thrushes. 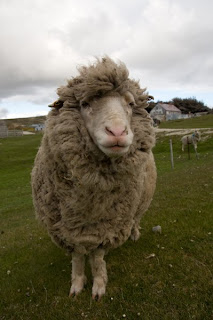 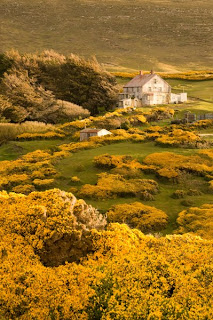 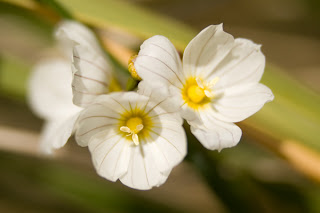 
Over at Roy Cove we did quite a bit of exploring looking to confirm old records of plants. We also visited a couple of areas that the landowners have fenced off to allow the land to recover from the hard grazing that it has had in the past. One interesting place we visited was Turkey Island, only accessible at low tide, and struck by lightening a few years previously and therefore burnt it is now starting to recover slowly and vegetation return. With a lack of grazing there are good stands of boxwood, and also plenty of nice ferns too. 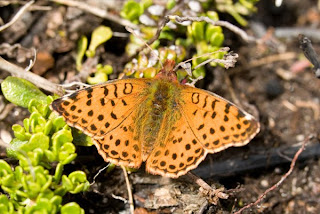 
The sheltered gorge and warming sun of Herbert Stream gave a chance for a Falklands Fretillary to stretch it's wings. 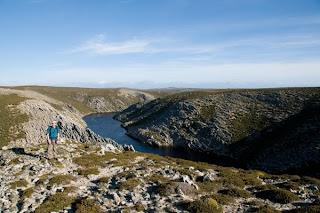 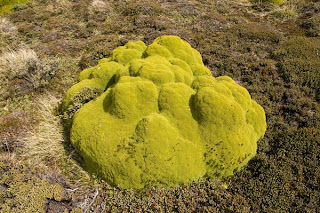 A long but interesting day was had on Sharp Peake, looking for ferns. The top of the hill had a brilliant rocky ridge running along it and the view was pretty good too. Along the back of the hill on the coast were some massive Balsam Bog cushions. 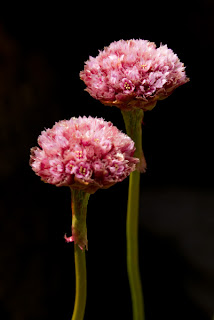 From Roy Cove we went to the Charters Horse Paddock, this area has historically only ever been grazed lightly by horses, and therefore has a high diversity of plants. In general it seems that native plants are especially tasty to sheep.

After Charters we stopped by at Roy Cove for one night to make use of the hot water, and then headed off to Dunbar.

At Dunbar we met up with the owners for morning tea and discussed where we would investigate for plants. Their two children then led us out to Grave Cove to the Albatross colony. The route was good fun to drive, an interesting stream crossing, and a brilliant sandy beach too which we were chased across by an Upland Goose! 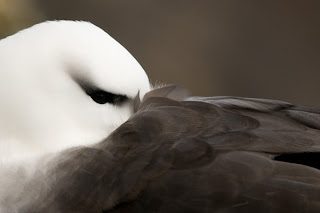 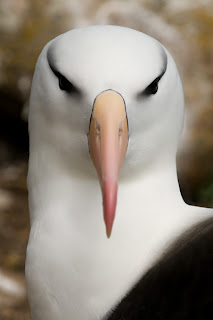 Dunbar had a great camp site, Hot Stone Cove, a short distance from the track and right next to a beautiful bay. The bay dries out when the tide is low, and the sand and stones warm up in the sun, when the tide comes back in the water in the bay warms up, hence the name! Early one morning I was woken up by a strange rattling, and looking out of the tent spotted two Johnny Rooks playing with the chain on the water canister! They are inquisitive birds and pinch anything not fixed down, cameras, sunglasses, lenscaps, hats... 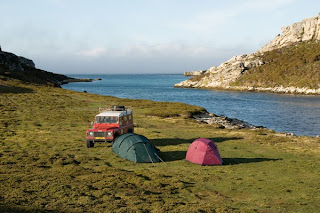 It was a misty day when we went to investigate some stone runs for Snake plant. It didn't take too long to find some, and once you find some you find more. It was pretty tricky scrambling about in the stone runs, and surprising that some large rocks were quite unstable. 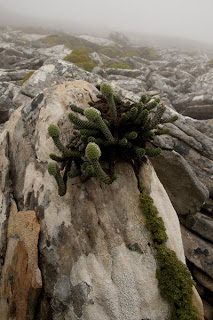 It's easy to see how the Snake Plant got it's name, and again it's tasty to sheep, and only commonly found in large stone runs where sheep can't get to it!

From Dunbar it was an early start to catch the flight from Port Howard back to Stanley, leaving the Land Rover with Rebecca and the newly arrived Richard and Brian to carry on the work while I headed off on a new field trip with SMSG. The flight was good fun, the Islander airoplanes take off in no distance from anything that vaguely resembles a runway! From Port Howard we headed to Fox Bay, and then back to Stanley. Low cloud blanketed the North of the Islands but there were good views to the south. 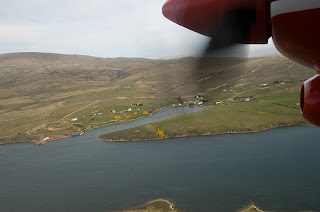 Port Howard from the air

With a brief stop in Stanley I had just about enough time to do some laundry and re-pack for the next trip the following day!