While we were out filming for the Antarctic 48hr Film festival I spotted a different duck. I managed to get this photo, not great as it was distant and on my compact. But good enough for i.d. My thought of Blue winged teal, was confirmed by a couple of birders in the Falklands, so rather pleased. This could be the second sighting on the island so a good spot. Unfortunately I’ve not seen it again, and I’ve been dragging my 500mm lens and tripod around with me in the hope of a better photo ever since!

While I had my beast of a lens out I took a few other photos. The South Georgia pintail can look a bit ‘boring brown duck’ from a distance, but up close they are quite pretty. They have a lovely little call too, a gently whistle, with an even quieter ‘ziiip’ in it too. 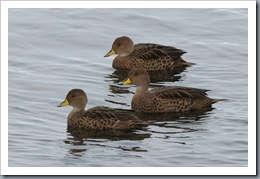 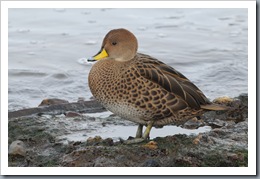 Spring must be on it’s way. The Pintail seem to be getting a bit frisky, and the Terns are too. I caught this pair courting with a nice little fish one had caught. I was quite pleased with the snowy background isolating them, and letting the contrast in their plumage show up better. 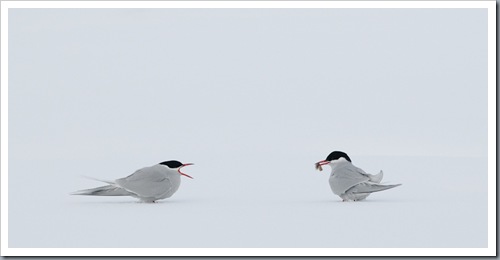 Fingers crossed the Blue winged teal will appear again, and until then I’ll carry on hulking my big lens around, even if it doesn’t appear it’s a worthwhile effort.