Working in the sunshine, what an office! 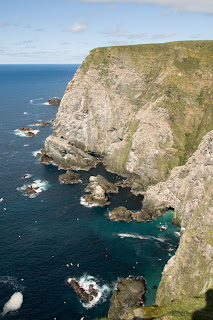 It's on days like this (Friday) you really know why you do a job like this. Glorious sunshine, a gentle breeze, birds migrating and birds getting on with breeding. I have to admit, having this view for an 'office' is pretty good. 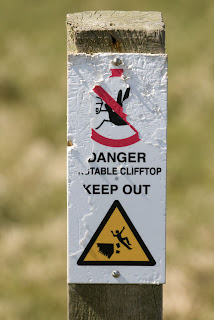 The section of cliff that has been crumbling into the sea over the last couple of years seems to have remained fairly intact over the winter. The nice new signs that I put out last year seem to have attracted quite a bit of attention though. Beak marks can be clearly seen in the tattered remains, some of the signs have corners missing, and some have come off completely!
Monitoring work is under way, the Gannets have started laying eggs, Kittiwakes are on their nests, Guillemots and Razorbills have taken up residence on the ledges and amongst the boulders, Puffins have come back to their burrows, and the Bonxies are ever watchful for their next meal!
Each year monitoring takes place at fixed study plots at different places on the cliffs, these are photographed and each nest numbered. Each nest is followed through the breeding season so productivity can be measured. 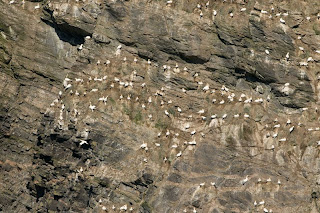 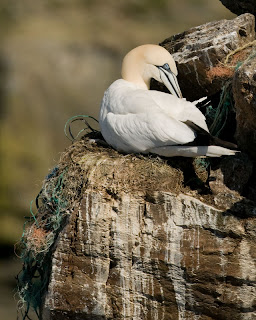 A beautiful Gannet surrounded by human rubbish
Migrants are still coming through, Willow Warblers and Chiff Chaffs are flitting through the bushes, and they have even been singing in the sunshine which is a nice sound of spring that doesn't happen all that much up here. One impressive bird to get this far north is a Hoopoe. Brydon Thomason spotted one at Hermaness and immediately put out the message to locals and came and got me to go and find it. Unfortunately it had disappeared, but it was an excellent record. The Shore Station garden was living up to it's reputation as a sheltered place for the occasional migrant. As well as two Chiff Chaffs (one singing) there was a nice male Pied Flycatcher who was happily feeding from the bushes while I watched quietly from behind the wall. 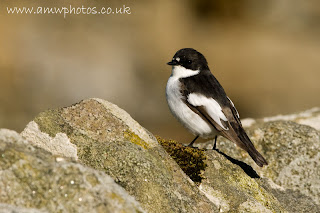 Male Pied Flycatcher
Early in the day a local birder/photographer and friend Rob Brookes had spotted a Sea Eagle flying over his home so the rest of us were keeping our eyes peeled. On the way back from the cliffs I got a quick call from Brydon to say that there was a Sea Eagle just heading over the hill from the reserve carpark. It was coming my way and the first I knew was that all the Bonxies were all up in the air, not something that happens often as they are usually the top of the food chain. The Eagle flew across the reserve, and came directly over my head, I could see it looking down at me, and he circled a few times before heading off North East and gaining some impressive height. This bird is tagged as number 08 from a reintroduction project, you can see the wing tags in my photo. 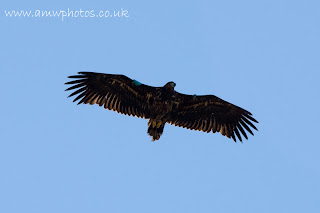 Juvenile Sea Eagle
Writing this unfortunately it's turned cold again, but hopefully it'll brighten up again very soon and give the migrants a chance to pass our way!
Posted by alastairwilsonphotos at 15:32